Here’s Looking at You, Bogie!

Con McGrath takes a look at the untimely passing of Hollywood legend Humphrey Bogart who died sixty years ago this month, aged 57.

Named as the greatest male star in the history of American cinema by the American Film Institute in 1999, Humphrey Bogart was without doubt one of the biggest stars of the silver screen and of Hollywood’s golden era. 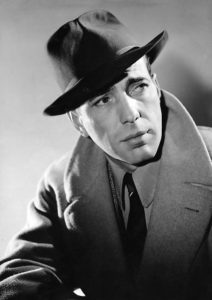 These classics appear on multiple channels over the holidays, and not just at Christmas either, but all year round as well. For in a career that spawned almost three decades, ‘Bogie’ appeared in about 75 feature films (85 credits in total if one includes television appearances and shorts), thereby averaging a staggering two-and-a-half films per year over thirty years.

During this time, Bogart became the quintessential hard-boiled cynical tough guy, and ultimately a genuine cultural icon. His swarthy complexion, heavy facial features, wiry build, and ‘harsh, nasally voice’ made him an ideal choice for all of the tough-guy roles he played.

Yet in her first autobiography By Myself, Lauren Bacall challenged this “tough guy” representation, offering a graphic account of both their courtship and her husband’s illness.