THE ANCIENT Rathcroghan site in Roscommon is on course to becoming a major international attraction with renewed plans to add it to the UNESCO World Heritage List.

The old capital of Connacht, where kings and queens were inaugurated, was one of six ancient royal sites represented at a meeting with government officials on January 18 in Dublin – aimed at getting them onto the prestigious list after a seven year delay.

The Rathcroghan complex in Tulsk – the largely unexcavated “Tara of the West” rich with ancient tombs and other monuments – is part of a “serial nomination” for The Royal Sites of Ireland. 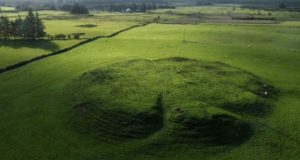 Archaeologist Daniel Curley, 28, who was one of the people at the meeting representing Rathcroghan, where he manages its popular visitor centre and tours, said they last met in 2015 and that progress was finally made, seven years since the group application was made in 2010.

He said: “This is a viable way of engendering a pride in our county and our past, which would also have untold social value.

“The often-cited example of the change in employment numbers at Brú na Bóinne before and after UNESCO World Heritage status highlights how beneficial a deliberate focus on heritage and cultural tourism can have on rural areas.

“The research benefits that this would bring to Rathcroghan alone would aid us in further developing our understanding of this royal site and its place in Ireland’s illustrious past”.

He said the meeting was with officials from the Department of Arts, Heritage, Regional, Rural and Gaeltacht and that they agreed to meet again on Tuesday, April 11 at the Hill of Uisneach, Co. Westmeath.

He said they are sending a “technical evaluation” to international peers to review and there will also be a public consultation process so that the opinions of the affected local communities can be heard.

The five sites in the nomination made by the Irish government are Rathcroghan; The Rock of Cashel, Co. Tipperary; Dún Ailinne, Co. Kildare; the Hill of Uisneach, and Tara in Co. Meath.

Britain’s Department for Culture Media and Sport applied for the Navan Fort site in Co. Armagh and were also represented at the meeting of the ‘Royal Sites Steering Group’ in the department’s Dublin city offices.

A spokesperson from the Department of Arts, Heritage, Regional, Rural and Gaeltacht said the purpose of the recent meeting was “to review and advance progress on an application to UNESCO to have Ireland’s Royal Sites inscribed on the World Heritage List”.

Mr Curley had sought a detailed plan with positive measures that would ensure that communities and landowners are key stakeholders.

He added: “There are many benefits that UNESCO World Heritage Status could bring to all areas affected, including tourism and employment.

“Leadership is needed to see this through”.

There are currently just two Irish sites on the UNESCO World Heritage List, Brú na Bóinne since 1993, which includes the Newgrange passage tomb, and the island of Skellig Michael off the Co. Kerry coast since 1996.

Northern Ireland’s most popular tourist attraction, Giant’s Causeway in Co.Antrim, was added to the list in 1986.

The Royal Sites of Ireland make up one serial nomination on UNESCO’s “tentative”or provisional list, which includes six other applications for Ireland.