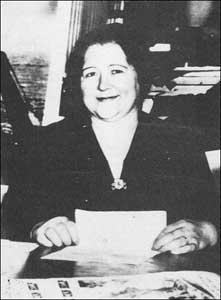 Love was the last thing on Bridget Dowling’s mind when she attended the Dublin Horse Show in 1909 with her father.

Then she spotted him – a handsome stranger sporting a neat, waxed moustache, dressed in a smart brown suit and homburg hat, carrying a white ivory walking stick with a gold handle. Unknown to her, the man was Alois Hitler from Austria, half-brother of Adolf.

After the show they met in Merrion Square. Alois asked Bridget to tea. It was love at first sight. But Bridget’s parents were against the match.

After making discreet inquiries, her father, William Dowling, a farm labourer from Kilmanagh, discovered that Alois worked as a waiter in the Shelbourne Hotel. And, when the couple ran away to London, Bridget’s father was so enraged he threatened to have the ‘Austrian foreigner’ arrested for kidnapping.

“My father was a real Irish man and wouldn’t hear tell of a wedding to a foreigner,” Bridget recalled. “When Alois had saved enough money we went to London. I wrote to my mother saying I wouldn’t return until we got permission to marry. She talked my father around and gave his consent.”

On 3rd June, 1910, they were married at Marylebone and, for a short time, lived in Charing Cross. Later they moved to Liverpool, where Alois became a salesman for safety razors, a novelty of the time. Angela, his older sister, was married to Leo Raubal. They lived in Vienna.

The enterprising Alois foresaw the expansion of sales staff in his company and sent Leo and Angela their travelling expenses so that they too could move to Liverpool. But instead of Leo and Angela descending from the train, a pale young man, dressed in a shabby suit stepped onto the platform. It was Alois’s younger half-brother, Adolf Hitler.

Alois was furious. The brothers exchanged strong words. They almost hit each other.

Later that night, when Bridget asked her husband why he disliked his brother so much, he replied, “When I was thirteen, my stepmother threw me out of the house. I was apprenticed to an Innkeeper, Herr Spressler. He was a brute too. When my father came to see me, I’d lost weight and was black and blue from beatings. “I’d always wanted to be and engineer, but that cost money. My stepmother needed all the money for her favourite, Adolf. He hid behind her skirts, never doing a day’s work.”

Adolf stayed with Alois and Bridget from November 1912 until April 1913. “He would sit in the kitchen, playing with our son Patrick,” Bridget remembers. “He’d maps of every country. He spread them out on the table, explaining how Germany one day would take its rightful position in the world.”

Then came World War 1 and Alois joined the German army. Shortly afterwards, Bridget received a letter from one of her husband’s friends, informing her that Alois had died from a serious wound.

“Mrs Hitler, you won’t have the satisfaction of visiting his grave,” it read. “The hospital where he died is in the Ukraine. The Bolsheviks are in control. There is revolution.” Bridget, now heartbroken and penniless wasn’t entitled to a pension as she’d married an Austrian.

Yet all wasn’t lost. As a young girl she always wanted to go on stage. She’d studied with the Mayfair School of Music and got a stage job with Harry Lauder’s company.

Then, one evening, her world fell apart. While on tour in Monte Carlo she spotted her ‘dead’ husband sitting in the audience! When their eyes met, Alois hurriedly rose to his feet and left.

Continued in Ireland’s Own