World-renowned Irish tenor, songwriter and poet Finbar Wright is celebrating his 60th birthday this year. From a youthful man of the cloth to one of the most recognisable voices Ireland has ever produced, he looks back on his extraordinary career to date with Kay Doyle.

Whenever popular Irish tenor Finbar Wright is asked to reveal the largest audience to which he has performed, he prepares himself for a shocked reaction on the enquirer’s face – especially when he tells them it was in front of one and a quarter million faces!
“It wasn’t today or yesterday either,” he says with a chuckle on some downtime in New Jersey during his recent US tour, “but all the way back to September 29th, 1979. That was the day when Pope John Paul came to the Phoenix Park and I was given the job of reading the gospel during the Papal Mass. He came up to say hello beforehand and I remember being impressed by what a fit and powerful man he was. He was also very pleasant, and it was a pity to see how he deteriorated after being shot just a couple of years later.

“I was a deacon at the time, which was the last step before becoming a priest, and I was too young and naïve to realise just what a big occasion it was. The Gospel reading is on YouTube today, if anybody is interested in seeing it!”

Religion has played a major role in Finbar’s life. Born and raised by the seaside at Garretstown, close to Kinsale in County Cork and even closer to Ballinspittle, home of the highly publicised moving statues of the Virgin Mary, Finbar was the youngest in a family of eight.

Distant relatives of the eighth President of the United States, Andrew Jackson, the Wrights were a small farming family, and Finbar enjoyed an idyllic upbringing in the hinterland that surrounds historic Kinsale.

“There were two seasons in Garretstown,” he recalls, “ the quiet winter and then the summer, when the place exploded. I remember as far back as the horse-drawn caravans bringing people on their holidays. There would be knocks on the door at anytime of day or night, with people looking for eggs, or milk or vegetables. There was always a few bob to be made. Fishing played a big part in my childhood too, and I have great memories of fishing off the rocks into the sea.

“Music had a big role to play in our house. My father had a fine tenor voice and sang the great songs of Mario Lanza and Bridie Gallagher. One of his party pieces was I’ll Take You Home Again Kathleen. 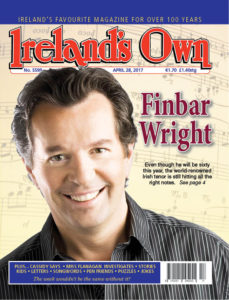 “We learned instruments from a young age like the melodeon and guitar, though my mother was quite progressive and at a time when a musical education wasn’t easy for young boys to come across, she introduced a piano into the house. I started learning the piano at the age of six, along with the theory of music, and it is a skillset that has stayed with me throughout my life.”

It was his secondary school education in Farranferris that attracted Finbar to a religious vocation. Inspired by teachers and mentors, he made the decision to enter the priesthood early on, even if he now feels that going down the road of being a social worker might have been a more fitting calling for him.

“I was ordained at the age of 22, and sent straight back to Farranferris where I taught Spanish and Latin,” says Finbar. “I always had a love for languages, and speak French and German too. However, I came to realise that being a priest was a lonely lifestyle and coming from a large family, I really missed having someone to talk to. Once you closed the door at night, that was it, there was no one to talk to until the next day. The loneliness of that empty room was overwhelming, and I had to leave it.”

Continue reading in this week’s Ireland’s Own (issue 5599)