Everyone loves a good thriller. But Tom McParland hasn’t always been thrilled by them, unless of course they are by the master of thrillers himself, Alfred Hitchcock.

In Belfast schoolyards a show-off was derided as somebody who thought himself the fella (hero) in the big picture. We called Westerns cowboys, gangster films cops and crooks, and religious orientated dramas holy films. Our mothers or teenage sisters appropriated the weepie as a woman’s picture. 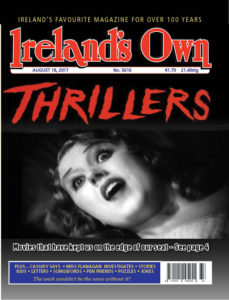 Because in those self-satisfied, two-gender days only females were understood to interpret convulsions.
What confused pre-adolescent me was, if there were women’s pictures why not men’s? So firmly had my chauvinist cement set that I regarded Batman, Hopalong Cassidy, Kit Carson, Jungle Jim, Superman and Tarzan as non gender. Even if I’d tried, I’d never dream up Hopalong Hetty, Kitty Carson, or Jungle Gemma.

But our genre oblivion occasionally showed cracks. For example, celibacy precluded our regarding of The Bells of St Mary’s as a weepie, a holy, or religious movie. Yet we wept buckets, were up to our wimples in habits and canonised Ingrid. We were too busy living the cinema to be genre conversant and overall our homespun terminology was generally adequate.

A great movie defies categorisation and proclaims its own greatness. As 1972’s The Godfather and the brutal dishonesty of Marlon Brando. Or the unflinching honesty of 9 year-old Tatum O’Neill’s duplicity in Paper Moon (1973). Both Paramount pictures. Both different as pasta and pumpkin. Both set in gangster America and both thrilled. Yet both made innocuous the term thriller.

Anecdotal history about movies can also be confusing. Silents weren’t called silents when they were silent, but moving picture shows until talkies arrived. Talkies lost that moniker after radio’s advent. Then with TV’s dominance the old silent name was resurrected – this time abbreviated to movies.