ANTHONY COSTELLOE remembers an Irish actor who had a long

and illustrious career on stage and screen

On June 18th, 1815, the combined armies of Wellington and Blucher’s Prussians defeated Napoleon in the decisive battle of Waterloo. In 1970 Hollywood recreated this historical event in the Dino De Laurentiis two-hour epic ‘Waterloo’.

The opening scenes show heavy black boots trodding the marble hallway in Fontainbleiiu and the first face we see on screen is that of Michael Ney, grand marshal of France (Dan O’Herlihy). His are the first words, firmly delivered to a devastated, smoldering Napoleon (Rod Steiger) – “Abdicate. Give up the throne.”

Wexford-born Dan O’Herlihy took sixth billing in this gripping spectacle which featured a cast of thousands. The principal stars were Rod Steiger (Napoleon) and Christopher Plummer as Wellington. 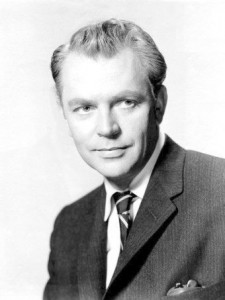 This talented actor was born in Wexford in 1919. He was a CBS boy who completed his secondary school education in Dun Laoghaire, then went to University College, Dublin, where he graduated as an architect at the age of twenty-five, but the thespian bug bit and in 1944 he got the lead role as Ayamonn Breydon in Sean O’Casey’s ‘Red Roses For Me’.

O’Casey, ‘Ireland’s Shakespeare’, as I term him, directed the play. It deals with the rail strike of 1911 and is set in a Protestant working class area of Dublin. Ayamonn (O’Herlihy) and his fellow workers are looking for a weekly rise of one shilling.
Ayamonn, though Protestant, has an unbiased attitude to all and has a relationship with a Catholic girl.

When Ayamonn, who is the leader, addresses the crowd of workers on Dublin bridge, speaking to them about the importance of unity among the working class, theatrical expertise comes into play and the back-drop of a dull Dublin skyline is transformed into a bright sky, symbolising the morale-boost that his words give to the crowd.
Tragically, when the rioting begins, Ayamonn is shot dead by the police. Sheila, his Catholic girlfriend, lays a bunch of roses on his chest.

O’Herlihy had found his niche and he then took this talent to the silver screen. In 1947 he starred as Nolan, a robber, in Sir Carol Reed’s black and white thriller ‘Odd Man Out’. This Rank Organisation movie, produced and directed by Reed, featured James Mason as Johnny McQueen, a man on the run from the authorities in Northern Ireland – the exact location is not specified in the movie.

Most of the cast, except the principal star, Mason, were actors from the Abbey Theatre. Many of the main characters found it difficult to master the Northern Ireland accent, including Dan O’Herlihy, and can you imagine the polished Oxford Mason tone sounding credible as a Northerner?

There is a scene depicting a robbery at a mill. Johnny McQueen (Mason), leader of an illegal organisation, Nolan (O’Herlihy) and Murphy, succeed in grabbing the cash. There is a shoot-out, the cashier is killed. Pat (Cyril Cusack) drives the get-away car, speeding from the crime scene. They are pursued. Nolan and Pat manage to take refuge in a safe-house, which, ironically, isn’t safe. They are betrayed and are shot dead because they refused to surrender. Exit Dan O’Herlihy from the movie.

Dan looked to the west and set his sights on Tinsel Town. He secured a role in Orson Welles’s adaptation of Shakespeare’s tragedy ‘Macbeth’ 1948. He starred as Macduff, a meaty role; he appeared in quite a number of scenes and had many lines to deliver. Jeanette Nolan featured as Lady Macbeth and O’Herlihy took third billing in the movie.
The fight scene between Macbeth (Welles) and Macduff (O’Herlihy) is riveting. ‘Turn, hell-hound, turn!’, Macduff, the avenger, roars at his enemy. Welles took the lead role in this fearsome 107 minute movie.

O’Herlihy’s career was further enhanced when he was one of the nominees for best actor at the 1955 Academy Awards ceremony. He starred as Alexander Selkirk in the 1954 movie, ‘The Adventures of Robinson Crusoe’. It was directed by Luis Burnell. It was a very challenging role. There were very moving scenes depicting Selkirk trying to cope with his loneliness and his alien environment.

O’Herlihy was not first choice for the lead role. The producers wanted Orson Welles, but Burnell insisted that O’Herlihy was ideal for the part as Welles had an obesity problem and his voice was thunderous.

‘The Young Lad’ followed in 1959. Then a 20th Century Fox action-western, ‘One Foot In Hell’, was released in 1960. The three leading actors – Alan Ladd, Don Murray and Dan O’Herlihy – were all ‘baddies’, hence the title. The movie was directed by James Clark and had a running time of eighty-nine minutes. It was filmed in Cinemascope.

Mitch Barrett (Alan Ladd) is an embittered man. He is made deputy sheriff of the town. He murders the sheriff. He becomes sheriff and plans to rob the town bank. He enlists the help of four miscreants: Dan Keats (Don Murray) an alcoholic, Sir Harry Ivers (Dan O’Herlihy), a posh-sounding polished,sauve pick-pocket, Julie Reynolds (Dolores Michaels), a prostitute, and Stu Christian, an evil gun-man.

Mitch goes on a killing spree, shooting Ivers (O’Herlihy) and Christian (Barry Coe). Julie kills Mitch Barrett, who wanted to kill all four so that his plot would be safe and secret.
O’Herlihy made three more movies in the 1960s – ‘Fail Safe’, ‘The Big Cube’ and ‘100 rifles’. After his brilliant performance as Michael Ney in ‘Waterloo’ he entered the realm of the horror genre. He starred as Conal Cochran in the blood-curdling ‘Hallowe’en lll: Season of the Witch’ when ‘bodies go bump in the night’ – a chilling, truly terrifying movie. He played the ‘baddie’ role again as a con-man in John Huston’s ‘The Dead’. He even had a shot at asciene-fiction movie, ‘Robo-cop’.

Dan O’Herlihy was married to Elsa Bennett for sixty years until his death on 17 February, 2005. They had five children. Irish to the core, he shared screen space with Hollywood’s icons. ÷