How did a piece of Nelson’s Pillar end up in Kilkenny?

Deep in the heart of Kilkenny city, the medieval capital of Ireland, lies a piece of Dublin. A very famous piece of Dublin. That piece is actually sixteen pieces, sixteen granite, cube-shaped stones that were once the plinth of the famous, and now infamous, Nelson’s Pillar.

The sixteen granite cubes, measuring two foot by two foot by two foot approximately, form a large circle round a fish-pond which is the centre-piece of the charming and intimate Butler House garden, a green oasis in the middle of the Marble City, and one of Kilkenny’s best-kept secrets. 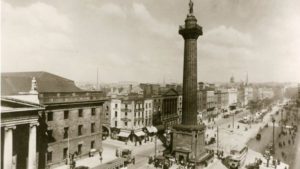 Butler House, a stone’s throw from Kilkenny Castle, was home to the Earls of Ormonde and is now a thirteen-room hotel where former President, May Robinson, stayed when opening our Watergate Theatre back in 1994.

How the remains of the plinth of Nelson’s Pillar ended up as a garden accessory in Kilkenny is a bit of a mystery which I have tried, with some success, to unravel.
When the Pillar was blown up by the IRA in March 1966, under the code-name ‘Operation Humpty Dumpty’, the rubble from the monument was, to the best of my knowledge, taken to the East Wall dumps in Dublin.

Nelson’s head was subsequently stolen by some students and effectively exploited as a fund-raising prank to pay off a Student Union debt, while the remains of the plinth came to the attention of a gentleman by the name of William Walsh.

William Walsh had been General Manager of the Irish Export Board or Córas Tráchtála. A man of vision, he invited some eminent Scandinavian, German and Dutch designers to Ireland in an attempt to raise the standard of design in Irish industry.

Mr. Walsh spotted the unused stables of Kilkenny Castle and had them converted into an internationally recognised centre for design. The upshot of all this was that in 1963, the Kilkenny Design Workshops, whose monogram KDW was designed by the artist Louis LeBrocquy, came into existence and Mr. Walsh became its Chief Executive.
Sometime after the Pillar had been blown up, William Walsh spotted the remains. Impressed by the craftsmanship of the lettering on the remains of the plinth, and believing it might be a source of inspiration to the graphic designers in the newly formed Kilkenny Design Centre, he had the stones from the plinth moved to the backyard of the Kilkenny Design Workshops.

Continue reading in this week’s Ireland’s Own (issue 5573)