In the summer of 1870, Cork witnessed the unimaginable sight of mounted cavalry charging down the city’s main shopping district with sabres drawn, mowing people down as they went. The London Times described the city as being ‘reminiscent of Paris on the eve of the revolution’. Pat Poland reflects on a time when the humble sewing machine set the streets of Cork ablaze….

For the ordinary man and woman, Cork, in 1870, was a grim place in which to raise a family. Wages were falling, the cost of living was spiralling upwards and emigration was rampant, resulting in ever-growing social tension. In June, this simmering undercurrent of unrest erupted in a strike by the city’s journeymen tailors resulting in scenes of unprecedented violence and destruction and precipitating a general strike that convulsed both city and county.

At the time, there were approximately 4,000 craftsman in Cork, representing sixty-seven different trades. One of the five most important trades was that of tailoring whose representative body, the Cork Tailors’ Society, had a membership of about 400. The tailors were well organized and well used to confrontation with the ‘Masters,’ as the owners of the tailoring establishments were called. 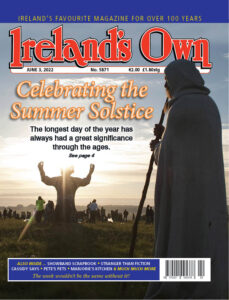 Now, the craftsmen were once more prepared to do battle on two contentious issues: wages, and the introduction of ‘new technology’: sewing machines.
The wage issue was complicated due to the fact that the tailors were exclusively employed on ‘piecework’. The bosses provided the tailors with bundles of cut cloth for which they were paid to assemble them into wearable clothing.

‘Piecework’ gave the Masters great flexibility to quickly increase or reduce their output as the market required. It also let them constantly search out the cheapest means of production. With manufacturers and contractors all competing against their counterparts, wages stayed depressed and working conditions remained poor.
The tailors’ wage demand was for an increase of a half-penny (1/2d) in the hourly rate of 3ƒ d. This rate, however, bore no resemblance to the actual time spent by a tailor while making up a garment; it was only used in arriving at payment for a garment which was calculated on the basis of a ‘log’.