Don’t know what exotic places you have ever visited, but recently I headed off to IKEA, a small ‘country’ just south of Ballymun. I filled the car with diesel, headed for the airport, took the turn off for Naul/Ballymun, veered right and there it was – this small ‘country’, ‘continent’ almost, stretched out before me.

You don‘t need your passport to enter IKEA, just your wallet, lots of stamina, plenty of patience and an avid interest in household fittings and paraphernalia. Oh, and a compass if, like me, your sense of direction isn’t what it used to be, although what it used to be was never what it should have been. 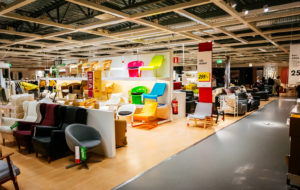 Now, in fairness, it’s hard to get lost in IKEA; all you do is follow, not the yellow brick road, but the arrows on the floor, which I did for a while but then I got side-tracked, literally, and, not for the first time in my life, found myself going backwards instead of forwards.
I should have stayed with the missus, but I was only slowing her down, and so she left me otherwise, as she said herself: “We’ll be here ‘till the cows come home.”

And so, we went our separate ways, she following the arrows, me following my nose and watching the shoppers shopping in IKEA, which is a fascination in itself. All of human life is there – yummy mummies, dapper daddies, two-year olds, twenty-two year olds, eighty-two year olds, and the likes of me, a country man ‘up for the day’.

It was like the United Nations what with the various languages and fashions. There were women in minis, women in kaftans, women in sarongs and even fellows in sarongs! I half expected to see Ban Ki-moon and Kofi Annan strolling around. For the most part, however, IKEA was full of young home-makers with prams and toddlers in tow.
Did I mention the fact that it was my first time in IKEA and that I have no interest whatsoever in shelving or bedding or household fittings? I was just doing the wife a favour, I was her right-hand man, so to speak, for lugging any heavy goods on to the trolley and into the car.

For all of that, I was thoroughly enjoying myself in IKEA and was very much in awe of the size of the place and the number and variety of showrooms: bed rooms, dining rooms, sitting rooms, offices, whatever. Plus, there seemed to be 50 varieties, and 50 shades, of everything in this store the size of Sicily!

After an hour, however, I met the ‘wall’ as the pace of this marathon shopping outing got to me, so, I sat myself down on a wee chair in one of IKEA’s model kitchens and read my paper.

I was sorry I hadn’t brought a flask of tea and some Marietta biscuits to keep my energy levels up, or least to keep up with the missus who was now ringing me on the mobile wondering where I was, what I was up to (I was on my tea-break) and would I mind getting myself down to Aisle 23, subsection 705, or something like that, where she could do with my assistance.

And then, with our trolley-load of bits & bobs we headed for the long queues and checkouts where I swear to God a woman ‘driver’ (of a trolley) tried to take me on the inside. But I cut her off on a bend making her take her rightful place in the queue. BEHIND me.
One of the items we purchased in IKEA was a desk for our daughter’s abode in Dublin, which yours truly was enlisted to assemble. I opened the flat-pack, spread the contents methodically across the floor of her flat, took one look at the dozens of screws & washers, nuts & bolts and came clean with my daughter – I couldn’t do it.

It is never easy for a parent to admit to their child that they are inadequate in any way. And it was not easy for me to tell my daughter that not alone was I inadequate when it came to DIY – I was an abject failure.

Anything with more than six screws and that demands the use of a screwdriver AND an allen key is beyond my DIY capabilities. She understood perfectly (or so she said) and rang her boyfriend who arrived post haste with a Black & Decker. The desk is now assembled. I’m falling apart and feeling more inadequate than ever and in bad need of a break somewhere – anywhere but IKEA!