The year 1917 has long been viewed as one of changing political attitudes and loyalties. The watershed year witnessed the emergence of a new political phenomenon in the guise of Sinn Fein at the expense of the long dominant Irish Parliamentary Party. As the year came to an end and with four by-election victories under their belts Irish republicans confidently looked forward to realising their long held dream of achieving independence,
writes Eamonn Duggan. 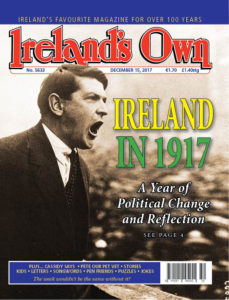 During the last few weeks of 1917 most people across Ireland began to reflect on a year that was notable, not for the violence of the previous year, but for the obvious change in the country’s political direction. The year saw the beginning of the end for the dominant political party of the previous forty years, the Irish Parliamentary Party, and the emergence of an altogether different and much more vibrant political force, Sinn Féin.

The new party, led by Éamon de Valera, was embraced by an increasingly politically astute electorate determined to effect a profound change in the way the country was governed. It voiced its opinion through the ballot box on four occasions during the year returning, each time, a Sinn Féin candidate and creating a momentum which culminated in a stunning Sinn Féin general election victory in December 1918.
However, as the long dark days of 1917 came to an end and the events of the following year were yet to unfold, the majority of the people, not only in Ireland but also across Europe, fervently hoped that the fourth Christmas of the Great War would be the very last one.

While conflict still raged on the continent, Ireland enjoyed what was a relatively peaceful year as political activity took centre stage. The year saw the emergence of a new and youthful leadership dedicated to removing British rule and establishing a republican administration in its place. Many of those who came to public notice during the year had played their part in the Easter Rising and had spent some time after it incarcerated in British prisons or camps where they had time to plan for the next stage of the struggle for independence.

The general consensus which emerged in republican circles was that for the time being long term political victories were more important than any short term gains that might be achieved through acts of violence against British forces or representatives in Ireland. The violence of the Easter Rising and its aftermath had taken a toll on everyone and there was a need, not only for a new approach to win over the political hearts and minds of the populace, but also a need for a period of time to reflect on what future direction the country should take.