When the last days of 1918 came to a close, the people of Ireland had many reasons to take some time to reflect on a momentous year which had brought much in the way of political upheaval as well as heartbreak and suffering as a result of war and illness, writes Eamonn Duggan.

As 1918 came to an end the people of Ireland were able to reflect on a momentous year which saw the emergence of a new political era while the suffering of more than four years of war on the continent came to an end.

The pall of gloom which descended on Europe in August 1914 shaped the lives of so many for so long, bringing with it untold misery and heartache for thousands of families who lost loved ones on the battlefields as well as imposing severe restrictions on life in general. 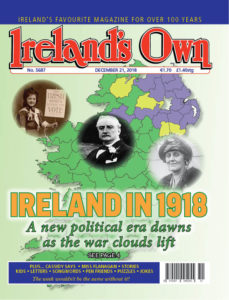 When the Armistice was signed on 11 November 1918, the release of tension was palpable across Europe as millions of people emerged onto the streets to celebrate and give thanks. It was no different here in Ireland and, though a country on the periphery of the battlefields, we as a nation of people also gave up our war dead and watched many of those who survived the slaughter return home maimed both in body and mind.

On the political front the country experienced a seismic shift of emphasis away from the pursuance of home rule to the more radical ideal of republicanism and breaking the link with Britain.

That shift was confirmed with the stunning result of the general election in December 1918 which heralded the emergence of a new and younger political class destined to take the country in a new direction towards independence.

In essence, 1918 was a year of profound political change and it shaped the country for future generations.

By far the most news worthy event at home and abroad was the ending of the war, which had claimed the lives of millions of people across Europe. Some 206,000 Irishmen of different political and religious persuasions had fought on the battlefields during the course of the conflict and at least 30,000 and probably many more never came home.

They distinguished themselves in the trenches of the Western Front and in the humid heat of Turkey and the Balkans, as well as on the high seas. Many had been publicly decorated for their bravery while those who were not had carried out their duty in no less a fashion and all in the name of democracy and the right of all nations to exercise self-determination.

Though the war eventually left a legacy of bitterness, with many across the country questioning whether Irishmen were right to fight in British uniform, there was no doubting the sense of relief as the population embraced those peaceful last few weeks of the year.

While the war was dominated by the actions of men, the role played by women was increasingly recognised, especially in industrial production in the factories as well as in the area of nursing and care of the wounded and dying.