Time passed or didn’t. Oisín could never be sure, as time had no meaning in Tír Na n-Óg. It seemed like three years ago when he left the shores of Ireland with Niamh of the Golden Hair, his wife and mother to his three children.
When he first met Niamh, he was captivated by her elven beauty. Her dulcet tones spoke of eternal life in a land that knew no pain or war or hunger. There she told him, he would rule forever, as prince over the
Land of Youth. 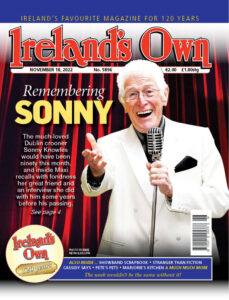 Everything she promised came to pass. His rule was happy, the people of Tír Na n-Óg never aged and there was no war. They were a race content. Yet contentment for Oisín, son of the mighty Fionn Mac Cumhaill, champion of the Fianna, was not sufficient to suppress memories of that life.

Niamh saw the longing in him return. Oisín’s gaze was far away, to a land of bardic warriors who filled the ranks of the Fianna. His last memories were of the hunt, when they first encountered Niamh. He still recalled with clarity the beautiful woman of Fairy.

“But not just any woman”, she had informed them, as though reading their thoughts. “I am Niamh of the Golden Hair, daughter of the King of Tír Na n-Óg,” she proudly announced. “And I have come for Oisín.”
Oisín smiled to himself remembering how the Fianna gathered around him, hoping to protect him from the magic of the Fairy Folk. His father, Fionn Mac Cumhaill spoke with such authority, that even Niamh of the Dé Danann, could not fail to be impressed.

“You will not take my son by magic, princess of the Sidhe. I will do everything in my power to stop you.”
“I will not force your son to come with me, Fionn, mighty warrior of the Fianna. The decision will be his entirely. Oisin is of the royal blood line of the Dé Danann. He also belongs to us,” Niamh replied.
It was true, Oisín knew. His mother Sadhbh was the same as Niamh. A woman of the Sidhe. A Fairy Woman who captivated the heart of his father.

Oisín’s mother was turned into a doe by a jealous Druid whose advances she thwarted. When Fionn Mac Cumhaill came upon Sadhbh, in her enchanted form, he felt compelled to protect the doe by taking her home to his fort.