With the greatest sporting spectacle on earth getting under way as the Olympics kicks off in Brazil, Dave Devereux looks at the Irish athletes that have brought home medals from the Games

Irish competitors have enjoyed plenty of success in recent Olympics, particularly in the boxing ring, and the country has a long history of involvement in the Games, experiencing many highs and lows since competing for the first time as an independent nation in Paris in 1924. 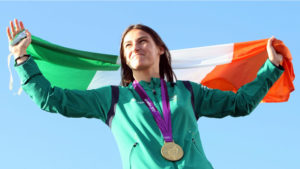 The Olympic Council of Ireland (OCI) was established in 1922, during the provisional administration prior to the formal establishment of the Irish Free State, and the OCI affiliated to the International Olympic Committee in time for the Paris Games.
In fact the country’s association with the Olympics goes back before 1924, when Irish athletes competed for the Great Britain and Ireland team and were listed as British in those earlier Games.

In the seven Olympic Games prior to Irish independence in 1922, people born and reared in Ireland won numerous medals and actually in the very early modern games, the idea of national teams was played down.

Irish athletes also tasted success representing South Africa, Canada and the USA, with the Irish Whales, a group of Irish-Americans who won numerous medals in weight-throwing events in the early 1900s, being a notable example.
Prior to the Olympics Games in 1906, individuals entered independently as there were no national Olympic committees in operation and Irish entrants had plenty of success during this fledgling period.

John Pius Boland was the first Irishman to become Olympic champion, winning two tennis competitions in Athens in 1896, while Scottish-born, Kerryman Harold Mahony, who won the Wimbledon singles title in 1896, won medals in Paris in 1900.
Tom Kiely was actually the first Irishman to win a gold medal, when he won in the ‘all-around’ athletics competition in 1904 in St Louis, as in the earlier Olympics silver was awarded to the winners and bronze to the runners-up.

In the London Games in 1908, Ireland were runners-up to England in the hockey tournament and the Irish polo team were also second on the podium, with Irish-born athletes also winning medals in a plethora of individual events.

Since the formation of the OCI in 1922 and with athletes competing for the Free State, Ireland have won 29 medals for sport at the Olympic Games, and three medals have also been collected in the arts.

In 1924 Jack B. Yeats earned a silver medal for his painting of the Liffey Swim, while Oliver St John Gogarty won a bronze medal for poetry with his Ode to the Tailteann Games and in the 1948 Games in London Letitia Marion Hamilton won bronze in Paintings for her work ‘Meath Hunt Point-to-Points Races.

Of the 29 medals won for sporting disciplines, boxing is head and shoulders above the rest with 16 medals, seven have been won in athletics, four for swimming and one each for equestrian and sailing.

Ireland’s most successful Olympics in terms of medal haul was the most recent Games in London in 2012, where the team took home six medals, the sixth coming after Rob Heffernan was recently awarded the bronze following the disqualification of the Russian gold medallist, bettering the previous best tally of five medals from Melbourne in 1956.

Continue reading in issue 5561, our 2016 Ireland’s Own Souvenir Special