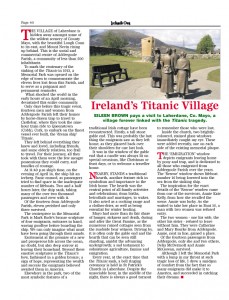 Read all about Ireland’s Titanic Village. In 2012, a Memorial Park was established in the village of Laherdane in County Mayo to mark the centenary of the sinking of the famous ship. The small community in the west of Ireland was devastated when eleven of its residents perished after the Titanic hit an iceberg and plummeted into the depths of the icy Atlantic Ocean.