Ireland, a nation with a rich and fascinating history to match all others, can add a new chapter to its illustrious past – a central role in the epic drama of early exploration to the frozen continent of Antarctica.

Few episodes in history are as captivating and awe-inspiring as Antarctic exploration and almost every significant event during the 100 years quest to explore the continent involved Irish men. The crucial link was the British navy which, for many hundreds of years, was a constant source of work for untold thousands of Irish men who flocked to both the Royal Navy and the merchant fleet. Since every early expedition to the Antarctic was a naval undertaking, it was inevitable that Irish mariners were so prominent.

Although characters like Tom Crean and Ernest Shackleton have wider gained recognition in recent years, little is known about characters like Edward Bransfield, Patrick Keohane and Robert Forde and others who played less prominent roles.
However, timing and circumstances were against these men. All Antarctic expeditions in the 18th, 19th and 20th centuries sailed under a British flag and it was often convenient to overlook these stories in the years following independence. No books were written about the explorers, no statues were erected and none was able to speak openly about the past. Most drifted into obscurity and it only in the recent past that memorials have sprung up across Ireland to recognise their incredible exploits.

Ireland’s first connection with Antarctic discovery can be traced back almost 250 years to 1773 when Captain’s Cook’s expedition made the first crossing of the Antarctic Circle. Among those on board in a minor role was John Marra, a troublesome gunner’s mate from Cork.

A much-travelled postcard with a fascinating story to tell was written in March 1910, by Hannah Keohane, the younger sister of Irish explorer, Patrick Keohane. Hannah, who lived on the Seven Heads Peninsula, in Cork, sent the St. Patrick’s Day card to England where Patrick was stationed in the Royal Navy shortly before sailing to the Antarctic on Captain Scott’s expedition. 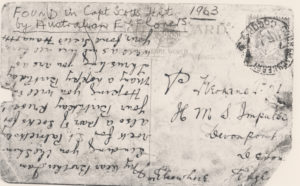 However, Hannah was not sure of the name of Patrick’s ship. The card, originally sent from Courtmacsherry, was addressed to Petty Officer Keohane on HMS Impulse at Devonport Docks in England. In fact, Patrick’s ship was HMS Repulse.

Hannah was also unsure where Patrick was stationed and scribbled an afterthought beneath the address: “Or Elsewhere” (bottom centre). Keohane did not receive the postcard before joining Scott’s expedition. But navy bureaucrats knew Patrick’s location and forwarded it to Scott’s expedition’s base camp at Cape Evans in the Antarctic. However, the mail only arrived once a year in the Antarctic, and Hannah’s card arrived after Keohane had left Cape Evans to return home.

Some kind soul thoughtfully pinned the card to the wall of the wooden hut where it remained untouched for 50 years. Some 50 years later in 1963, a team of Australian scientists camped in the hut and spotted the card. Without hesitation the scientists decided to card should be “returned to sender” and re-directed it to Hannah Keohane in Courtmacsherry. (top left) Sadly, Hannah had died in 1947 and Patrick passed away in 1950 without ever receiving his sister’s card.