In 1961, a troop of 150 Irish soldiers were posted to the town of Jadotville, Republic Of The Congo. They landed in scorching temperatures. Under Commandant Pat Quinlan, they contained up to 3,000 opposing forces over a period of six days – without one Irish fatality. Known as the Jadotville Siege soldiers, the troop are to receive formal recognition at a ceremony to mark the 55th anniversary of the event at Collins Barracks, Dublin.

In 1960, the mineral rich Republic Of The Congo gained independence from Belgium. However, following the murder of the Premier, Patrice Lamumba, a UN resolution was passed to prevent civil war in the region, and peace keeping forces were deployed.
Katanga, a breakaway state, quickly proclaimed its independence from the newly formed republic. Tensions ran high as the region it occupied generated up to 50% of state revenue. The Katanganese were a strong force consisting of not only indigenous tribesmen, but Belgium and French mercenaries with WW11 experience and sophisticated weaponry. 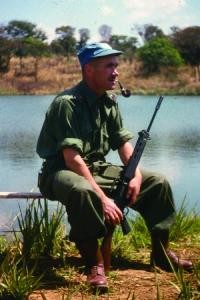 The UN resolve was made to engage in combat only if necessary to force Katanga back into the bush and undermine its recognition.

Very few Irish soldiers were sent out on Western command at the time – few had been outside the country and most had never been on an airplane.

In 1961, ‘A’ Company, 35th Battalion, were flown from Ireland via Libya airbase to the Congo. They landed in 90º C in heavy wool uniforms, brown leggings, leather boots and peaked caps. Their first line of attack came from blood thirsty mosquitoes who bit them incessantly. They initially remained in a transit camp at Elisabethville, a pleasant European style city and centre of activity. Beyond the city, however, the Congo had few roads or pathways, mainly consisting of bush. The area surrounding Elisabethville was known to be occupied by bands of rebels and hostile mercenaries.
The town of Jadotville was of significance as it was was part of a rich copper belt. Minerals in the area included uranium used by the Americans in the Hiroshima and Nagasaki bombs.

Initially a UN Swedish command had been sent to Jadotville to protect the white population there, arrest any remaining mercenaries and hold off Katangan advancement. However, the Commander saw no purpose in the mission.

The white population made it clear they did not want any UN presence, seeing it as a problem. Realising the vulnerability of his unit in an area surrounded by Katangan military and mercenaries, he duly returned with his forces to Elisabethville.

Following the Swedish return, under the command of Kerry native, Pat Quinlan (pictured above), the Irish men of ‘A’ Battalion were ordered to take up position in Jadotville. No proper operational instruction was given. They were deployed with inadequate basic and military supplies, (one truck and two armoured cars) to a vulnerable hostile area, 90 miles from base.
On their arrival in Jadotville, they took up base at an area known as Perfena garage. They were not welcomed by locals. Commandant Quinlan sent one of his men to Elisabethville on the pretext of illness, to relay similar information to that of the Swedish battalion previously based there. He saw no objective in protecting people who did not want protection and reported that mercenary lead Katangan groups were building up in the area and taking hold of the Lufira bridge – the only road link between Jadotville and Elisabethville. UN headquarters ignored the information, ordering Quinlan to stay put.
Quinlan masterminded an ingenious plan. He ordered his men to dig strategically placed trenches as a means of defence. This foresight was to later to save their lives.
On Tuesday, 12th September, Quinlan received a call from UN headquarters. Operation Mortar was taking place in an attempt to secure all crucial installations and rid them of mercenaries. This came as a surprise to Quinlan, who realised that this conflict would place his battalion in immediate danger.

On the morning of Wednesday, September 13th, while many of the Irish troops were attending open air mass, a combined force of Katangans, white mercenaries, Belgian settlers and local Luba tribesmen entered the UN compound hoping to take the Irish off guard.

They moved rapidly, but luckily were spotted by an alert sentry who fired a warning shot. Machine gun fire was aimed in the air from a jeep on the compound and the attackers retreated. Quinlan then ordered his men to take up positions in the newly dug trenches. All fell silent as the Irish remained in the trenches, vulnerable in number and in sweltering heat.

Hours later, the attackers approached. They came from all sides, in waves of approximately 600, heavily armed. They also had air support in the form of a Fouga Magister trainer jet fitted with under wing bombs and machine guns. The Irish Battalion was inadequately equipped with light personal weapons, a small number of antiquated water-cooled Vickers machine guns and mortars. 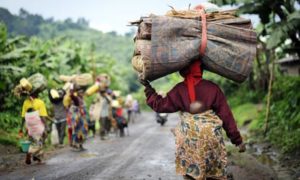 The besieged Irish radioed their headquarters with a brave message: “We will hold out until our last bullet is spent. Could do with some whiskey”.
Under the cover of darkness, Quinlan ordered the troops to continuously dig new trenches to confuse the enemy of their exact locations.

The Katangese continued the siege, preceded by bombardment from mortars and field guns. Amazingly, the Irish soldiers successfully defended against massive waves of attackers from their defensive positions in the trenches. They knocked out most of the Katangan mortar and artillery positions. After withstanding four days of repeated attacks, and on reduced rations of a spoonful of stew to sustain them daily, they held their position.

Several attempts were made to relieve the besieged soldiers by UN troops, but they were beaten back by forces of mercenaries at the Lufira Bridge. At one stage in the conflict, a mission to drop water by air was successful, but the containers were contaminated, (previously used to store petrol) and the water was undrinkable.
The Irish attacks proved accurate and effective to the point where the Katangese asked Commandant Quinlan for a ceasefire. Quinlan agreed. Their huge forces had been seriously diminished by the small but relentless Irish troop.

During the course of the five-day siege, ‘A’ Company suffered five wounded in action, with no fatalities. The Katangese had heavy losses by comparison. Hundreds were killed, including 30 mercenaries in addition to a large number of wounded.

Quinlan had no access to reinforcements, and with his transport destroyed by the overhead jet, a break-out was impossible.

He had no clear direction or communication from his superiors. The Katangese then gradually began to infringe on the ceasefire agreement. Running out of ammunition, food and water, Quinlan was left with no option but to save the lives of his troops by surrendering.

The troop was subsequently held hostage for almost a month while ceasefire terms were negotiated. They were unharmed but taunted with threats by their captors.
As they awaited their fate, they managed to pick up radio coverage of the 1961 All Ireland football match between Down and Offaly at Croke Park. The Katangese and their mercenary allies finally bartered ‘A’ Battalion for prisoners, and the exchange took place. They were freed on 25th October, 1961, much to the relief of their families at home.
The story goes that on the day following the ceasefire, Quinlan (pictured) walked into town to buy beer for his men, defiantly facing his opponents.

Despite their great bravery and military success, the UN and the Irish Army did not treat Quinlan and his brave Irish battalion with any honour on their return. The siege of Jadotville didn’t find the place it deserved in the annals of Irish military history until 2005. A plaque was unveiled at Custume Barracks to mark the 50th anniversary of the siege.

The Irish Government has now agreed to award a unit citation to ‘A’ Company in recognition of the achievement of the 150 Irish soldiers who fought against an estimated 3,000 enemy troops. This will take place in September, 2016, at Collins Barracks, Dublin. The unit citation is a formal honour reserved for extraordinary heroism in action against an armed enemy, and a fitting recognition for the gallantry displayed by Lt Col Quinlan and his men at Jadotville.

The Irish soldiers in Jadotville is now a ‘case history’ in the Australian Army as a perfect ‘perimeter defence’ operation. It is also taught in the Irish Military College. The Irish Army has now formally recognised the incredible defence operation that took place in Jadotville.

A movie has also been made, “The Siege of Jadotville”, filmed in South Africa and Ireland in association with the Irish Film Board. It was given a premier screening at the Galway Film festival in July, 2016 and has been distributed worldwide.
Pat Quinlan went on to become a full Colonel, and a commissioned portrait of him now hangs in the Congo Room of the Irish Defence Forces UN School.