A series by David Mullen

Nothing so starkly illustrates the ignominious decline of the British Empire than the pathetic spectacle of its final conquest. In September, 1955, a party of three men were lowered onto Rockall from a Royal Navy helicopter, planting a Union Jack and cementing a plaque proclaiming the granite rock as British territory.

The rationale for annexing the rock was that it might allow the Soviets to install spies or a listening post to observe missile testing in the area. This wasn’t particularly plausible, and nobody put up much protest—after all it was an uninhabitable islet coated in slippery bird droppings; what could they do with it? 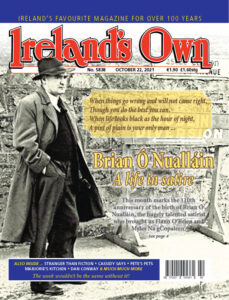 So where does Ireland fit into this tale of an islet whose closest other point is the island of Soay, part of St Kilda, the remote archipelago that’s part of Scotland’s Outer Hebrides?

The rock was certainly known from at least the seventh century, as St Brendan quite accurately describes a place closely resembling Rockall. There’s a legend too that when Fionn mac Cumhaill scooped out Lough Neagh, throwing it into the sea to become the Isle of Man, he tossed a pebble the other way which became Rockall.

The islet lies 423 kilometres north-west of Tory Island, which is considerably further away than other points in the Outer Hebrides. Although Ireland refused to recognise Britain’s claim to Rockall, it never asserted its own sovereignty over the rock. Under the UN’s Convention on the Law of the Sea, uninhabitable islets aren’t ‘territory’ meaning they’re not subject to a twelve-nautical-mile exclusion zone.