The Pioneer Movement in London was a haven for many Irish non-drinkers in the 1950s and 1960s. Denis Costelloe pays tribute to the organisation that became a social lifeline for so many.

As one who left the small village of Churchtown in North Cork in 1960 to find work in London, I spent my first months feeling lonely and lost in the big city. Being a pioneer, visiting pubs to seek recreation was out for me so social life consisted of doing the rounds of the many Irish dance halls from the famous Galtymore in North London, to the Harp in New Cross South London. 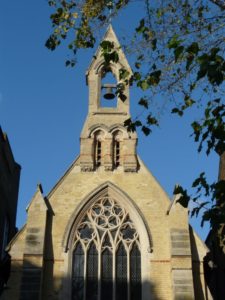 One evening, by chance, I ended up in East London at a small church hall called St. Monica’s Hall at Hoxton Square. Admission was two and sixpence, hours of dancing 8pm to 11pm, and Pat McNamee and his band were playing. I got talking to the Augustinian priest who suggested I join their Pioneer Centre. I accepted his invitation which opened up for me the beginning of a new social, and dare I say, spiritual life as well.

For me and countless other emigrants the Pioneer association in London was to provide decades of friendship and companionship that cured our loneliness, and rejuvenated our lives in so many ways. So how did it all begin?

The first Pioneer Centre in London was established at the Servite Church in Fulham Road London SW6 in December, 1949, by two gentlemen named P. Doyle and S McLarron.

Oddly enough, nothing further is known about these two Pioneers. However, their foundation of this one centre must have gained publicity either by the Pioneer Magazine in Dublin or via the Catholic press or Irish priests in London as, by 1959, ten more centres had sprung up.

The sixties saw an amazing rise of Pioneer Centres in London and forty-five new centres were established during this decade. A report from 1966 said that there were 5,000 registered Pioneers in the London area and 2,000 Probationers True. The Pioneers’ objective was, and still is, a spiritual one, with its daily prayer to the Sacred Heart. But in the fifties and sixties in London its contribution to the social and well-being life of countless emigrants was simply enormous.

Irish Pioneers met fellow Irish Pioneers, and English Catholics who had never heard of the movement also became members. Many couples met and got married as a result of these get togethers. Juvenile Centres were also founded. Every month centres sent their representatives to the London Regional meetings at the Holy Rood Convent at Camden Town.

Nearly every Sunday afternoon from October to March, there were Pioneer functions, dances that is, organised by every centre which ran usually from 3pm to 6.30pm, where the format was dancing, a raffle, sandwiches and cake and a talk by the Regional President. We had the annual Regional Rallies – rallies always took the format of a Mass – a concert and a dance. In 1966, for instance, at St. Pancras Town hall opposite Kings Cross station, 1,200 pioneers turned up to welcome Fr. Dan Dargan from Dublin along with Bishop Eamon Casey. I also recall wonderful London Pioneer presidents such as Pat O’Grady, Tony Watson, Michael Hurley, Declan Greehy, Pat Hampton, Jimmy Kelly and Pat St. George – the latter, I am pleased to say, still holding office.

They ensured that the spiritual side was never forgotten, and Pioneers ran several coaches every May to the Priory at Aylesford, in Kent, for a day of prayer.
There was also the annual retreat and midnight vigil, and the bi-annual visits to Lourdes. Pioneer magazines were sold every Sunday at Hyde Park Corner by super salesman, the late Joe Fanning, and the movement was very prominent as well at the St. Patrick’s Day London Parade.

Going back to the social side, St Monica’s Centre in Hoxton had a Pioneer football and table tennis teams. And other centres promoted quiz nights, come dancing, tennis, cross country races and unforgettable concerts and drama groups. Kilburn Centre, with Joe McMenimem and Barney Collins, staged The Country Boy at Cricklewood, in 1967, which attracted an audience of 700 for its two performances.

Pat Gray at the Amwell Steet Centre produced Watch it Sailor, and Fr. John Hyland at St Monica’s went for the Brian Rix Whitehall farce Dry Rot which received great reviews.
Mention must be made also of the bands of these decades; the Moffat family and friends formed the St Patrick’s Band, later changing to the name of Clutching Roots. Maurice Burke led the Kingdom dance band.

The most famous, though, were the Benn brothers, Liam and Michael from Co. Clare, whose band included Pat O’Hanlon, Bill Furlong Steve Kelly and Jack Donoghue. And of course the old maestro himself, Pat McNamee, a native of Aughnacliffe, Co. Longford.
Pat and his music were the resident band at the church hall at Amwell Street Centre and played at Pioneer Centres all over London for over two decades or more. Band members included Freddie Spittle, Pat Heaney, Bernie Gilmartin and Brian Dolan.

I conclude the list with the current London Pioneer officers namely Mary Ryan (Minutes Secretary), Pearl Norton (Treasurer) and the man from Knocktarra Co. Galway, the durable President Pat St. George, who has been the leading light down the years.

I have kept one very very special name to last. Back in May 1960, a Miss Maureen Geelan arrived from Co. Longford to join her sister, Patsy. She joined the Dollis Hill Pioneer Centre, and later married Pat Hampton.

Maureen, a real livewire, made a tremendous contribution to the Pioneer movement. She edited the Pioneer year book for many years. Her crowning glory in the literary field came in 2001 when she published a history of the Pioneer movement in London, as experienced by the members in the London Region between 1949-2000.
Maureen passed away in 2014 and as a tribute I would like to quote a brief passage from her memories in the book Thanks for the Memory. She wrote, “My experience as a Pioneer in London has been a positive one. I met many wonderful people without whose friendship and support. particularly in my early years I London, life would have been very lonely indeed.

“My spiritual life was enhanced by the many religious and spiritual activities. I enjoyed the social life as well and the wonderful friends and friendships I made.”
And so say all of us. The majority of us are now in our seventies and eighties but the melodies and the memories of these Pioneer years will forever linger on. May God bless all those wonderful people I met down those years.