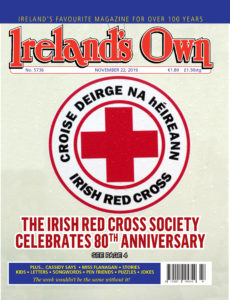 Scriven’s grandfather, William Barclay Scriven, died in Quebec in 1782. The family moved from Ireland to England in 1826, and back again in 1834 to live in Dublin. Joseph attended Trinity College, Dublin, at age 16, and although he was a good student, he was in poor health at the time.

Hoping to carry on the family military tradition, Joseph spent two years at Addiscombe military school in England, but, having been declared physically unfit for a soldier’s life, he returned to Trinity College, Dublin, where he received his BA in 1842. He gained employment as a tutor and in 1843 he planned to get married.

Tragically, his fiancé fell from her horse while crossing a bridge, as Joseph stood waiting on the other side, and drowned in the River Bann, the day before they were to be married. The River Bann is the longest river in Northern Ireland.
That tragic event helped him to move towards one of the Separatist religious societies which had recently been established in Dublin at the time.

Joseph was influenced by the ideas of a group called ‘The Brethren’, which had its beginnings in Dublin when he was a child.
The fundamentalist ‘Plymouth Brethren’ trusted in the absolute authority of the Gospels. Their great event was the Pentecost. They cared for none of the established churches, and felt no need for a pulpit or conventional clergy, when every male was meant to minister at the time.