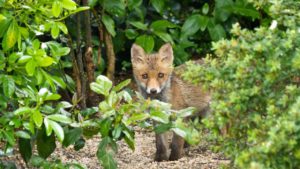 The red fox, Ireland’s largest land predator, is common throughout the country in both rural and urban habitats. Elusive, and largely nocturnal, the fox usually stays well hidden and many people, particularly in our cities, go about their lives completely oblivious to the proximity of this striking mammal.

Adult foxes grow to around a metre (3.28 foot) in length and weigh between five and seven kilos (11-15.5 lb), with the dog fox being slightly larger and heavier than the vixen. In captivity foxes can live for up to fourteen years, but the average lifespan of wild adults is much less. The breeding season starts in December and peaks around the end of January and start of February. During this period foxes are more active during the day than normal and are generally seen more frequently by people.

The fox’s earth can be found in a variety of habitats, but a favourite rural location is at the periphery of woodland where there is plenty of cover and easy access to both the wood and to the open pastures beyond. Occasionally foxes will occupy old rabbit warrens or badger sets to rear their young.

On average four to five cubs are born around March onto the bare soil of an underground chamber down in the earth.

The young are born blind and covered in short chocolate-coloured fur. Their eyes open at around two to three weeks old, and at first are a slate-blue colour, changing to brown or amber at about four to five weeks. This coincides with the start of a change in coat colour, the chocolate brown gradually changing to the more familiar red — although individuals can vary greatly in colour, with some remaining quite dark for life. By this time the inquisitive cubs have started to explore outside the earth, first on wobbly legs, but becoming increasingly steady and bold as the weeks draw on.

They begin foraging for food around the entrance of the earth and will take the odd beetle, earthworm or slug if the opportunity presents itself.