Few Irish birds have a song that lends itself to description quite as well as that of the yellowhammer. It’s ‘little bit of bread and NO cheese’ arrangement used to be a familiar sound of Irish farmland and hedgerows not so long ago. Alas today, like so many of our farmland birds, the yellowhammer’s song is heard much less often.

The yellowhammer is a colourful member of the bunting family and, as its name suggests, its plumage is dominated by yellow. Males in particular are a very striking bright yellow, and in breeding plumage can appear almost canary–like, but with narrow black lines around the eyes and cheeks and a rustier breast. Females are much duller than the males, but are still obviously yellow, with brown face markings and brown streaking on the body, while juveniles tend to be a streaky brown with very little yellow showing. They can however be separated from most small brown birds by their combination of a rich chestnut rump and white outer tail feathers.

This robust little bird reaches between 15cm and 17cm (c. 6-7 inches) in length, has a wingspan of 23-30cm (c. 9-12 inches) and weighs 25-36g (c. 1-1.25 oz). It has a heavy-set body and the typically thick bill of a seed-eater. Their diet consists mostly of seeds, although they also hunt high-protein prey like insects and spiders, especially when feeding their young. 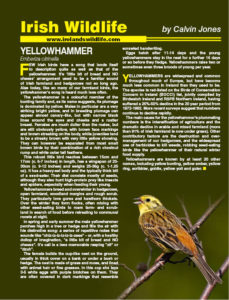 Yellowhammers breed and overwinter in hedgerows, open farmland, woodland margins and rough scrub. They particularly love gorse and hawthorn thickets. Over the winter they form flocks, often mixing with other seed-eating birds to roam farm- and scrub-land in search of food before retreating to communal roosts at night.

In spring and early summer the male yellowhammer perches high in a tree or hedge and fills the air with his distinctive song: a series of repetitive notes that sounds like “chiz-iz-iz-iz-iz-iz-zeee” – or, with a healthy dollop of imagination, “a little bit of bread and NO cheese”. It’s call is a less memorable rasping “zit” or “dzuh”.

The female builds the cup-like nest on the ground, usually in thick cover on a bank or under a bush or hedge. The nest is made of grass and moss, and lined with animal hair or fine grasses. In this cup she lays 3-5 white eggs with purple blotches on them. They are often covered in dark markings that resemble scrawled handwriting.

Eggs hatch after 11-14 days and the young yellowhammers stay in the nest for a further 16 days or so before they fledge. Yellowhammers raise two or sometimes even three broods of young per year.

Yellowhammers are widespread and common throughout much of Europe, but have become much less common in Ireland than they used to be. The species is red-listed on the Birds of Conservation Concern in Ireland (BOCCI) list, jointly compiled by Birdwatch Ireland and RSPB Northern Ireland, having suffered a 25%-50% decline in the 20 year period from 1972-1992. More recent surveys suggest that numbers continue to decline rapidly.

The main cause for the yellowhammer’s plummeting numbers is the intensification of agriculture and the dramatic decline in arable and mixed farmland (more than 91% of Irish farmland is now under grass). Other contributory factors are the destruction and over-management of our hedgerows, and the widespread use of herbicides to kill weeds, robbing seed-eating birds like the yellowhammer of their natural winter food supply.