Like so many of our western isles, Inishvickillane, one of the Blasket islands of County Kerry, holds the remains of a substantial early-Christian monastery. It was supposedly founded around 700 AD by Saint Mocheallóg Mac Uíbhleáin, from whom the island derives its name.

Saint Mocheallóg’s legacy, however, is probably better recognised by the church he founded in County Limerick around which a town grew up – Cill Mocheallóg or Kilmallock.

Amongst the ruined monastic buildings, beehive huts and holy wells was found a pair of ogham stones, those early-Christian stone pillars bearing Latin inscriptions in a uniquely Irish stone-carved alphabet. 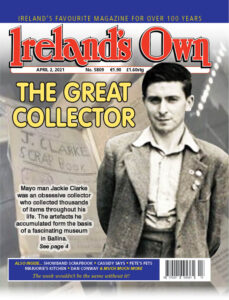 One of these stones has been lost, but another, bearing a worn and unclear inscription referring to someone called Uí Flaithim, was removed to Trinity College in Dublin in 1902 for safekeeping, and it’s to that one we’ll return later.
Inishvickillane has, for most of its history, been only intermittently inhabited with long periods where nobody lived there. From the 19th Century, it was the home of the Ó Dálaigh family. Cáit Ní Dálaigh was one of ten children and four daughters from Inisvickillane in the late-1800s.

They were ‘as easy on the eye as any four women you might find on the island’, and Cáit caught the eye of the great Blasket writer Tomás Ó Criomhthain author of An tOileánach (The Islandman). He sought to marry her, but his older sister deemed her an unsuitable match, and Cáit emigrated to America.