Seventy years ago one of the world’s best-loved Christmas films hit the cinema screens, but it wasn’t an instant hit, writes Seán Hall

On 20th December 1946, It’s A Wonderful Life, the latest motion picture from acclaimed director, Frank Capra, famed for his previous works such as Mr. Smith Goes to Washington (1939) and the Why We Fight films, broadcast during the Second World War as Allied propaganda, was released in New York City, at the notable Glove Theatre.
Some critics took this picture to their hearts and warmed to it almost immediately, with esteemed publications, Life and Time magazine praising the film for its comedy, drama and heart-warming depiction of human relations. 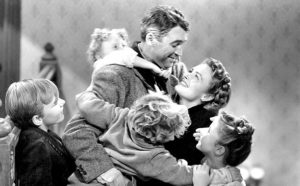 However, the film had its detractors in the printed press, did not garner great interest from the general public, and actually lost $252,000 for its producers on its release. Only succeeding generations have truly given this masterpiece of cinema the credit it is due.
The film follows the life of George Bailey (played by James Stewart), a small businessman who inherited a loan company from his father, and is now a suburban father of three and happily married to local belle, Mary Hatch (Donna Reed).

Mr. Potter (Lionel Barrymore) the sinister local bank manager is determined to get his hands on the Bailey business and is presented with his opportunity when George’s uncle unwittingly leaves $8000 of the business’ money in Potter’s office.