The death of broadcaster Larry Gogan earlier this year got me thinking about phrases used by radio and television presenters. Larry was such a nice man and always consoled contestants to his ‘Just a Minute Quiz,’ who may have answered only a few of his questions. Larry would re-assure them by saying ‘‘Ah they didn’t really suit you.’’

We lost another great broadcaster in January when Marian Finucane passed. ‘‘Hello There’’ was Marian’s trademark introduction for her weekend programmes on RTE Radio One. She was a great person to expand a debate, but if some contributor was making some outrageous claim Marian would say ‘Ah hold on there now.’’ 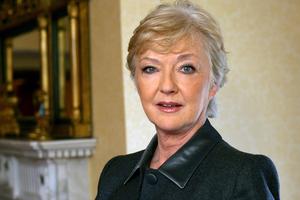 More mature readers will remember the words of Leo Maguire, who presented the Waltons sponsored programme on Radió Éireann on Saturday afternoons. Leo’s famous line was ‘‘If you feel like singing, do sing an Irish song.’’
Around the same era Din Joe Fitzgibbon had a great introduction for his programme which was called ‘Take the Floor,’ also on Radió Éireann. The Corkman, who was synonymous for having ‘dancing on the radio,’ would say ‘‘Lift the latch, open the door, step right in and take the floor.’’

David Frost had a much more formal introduction for his famous television interviews.
David’s opening line was always: ‘‘Hello, good evening and welcome.’’ On BBC Irish-born Dave Allen had a simple sign-off. He would say, ‘‘Good night, thank you and may your god go with you.’’

Gay Byrne made Colette Farmer famous with a simple instruction. Gay’s famous line ‘‘Roll it there Colette,’’ was regularly heard on the Late Late Show on Saturday and later Friday nights. Gaybo also started a new trend when giving out a prize, saying ‘‘there’s one for everybody in the audience.’’ 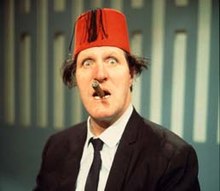 In the early days of RTE if a contestant on ‘Quicksilver’ was not sure of the answer to one of Bunny Carr’s questions, they would ask Bunny to ‘‘stop the lights.’’ You might hear people around the country still use that phrase.
George Hook had a good line when he used to present a programme on Newstalk. If George wanted someone to go back on a topic he would say ‘‘Back up the Bus.’’

Remember Bruce Forsyth on the Generation Game on BBC on Saturday evenings? Bruce’s intro was ‘‘Nice to see you, to see you nice.’’ Also on BBC Magnus Magnuson always insisted on finishing a question if he heard the buzzer, saying ‘‘I’ve started so I’ll finish.’’

Tommy Cooper was a funny magician. His famous line was ‘‘Just like That.’’ Another famous magician was Paul Daniels and his line was ‘‘You’re going to like this, not a lot, but you’ll like it.’’

Max Bygraves was a bubby character on television and his line was ‘‘I wanna tell you a story.’’ ‘‘Evening All’’ was the famous intro in Dickson of Dock Green, while Larry Grayson would say ‘‘Shut that door.’’

A television programme I used to like was ‘The Fall and Rise of Reginald Perrin.’ Leonard Rossiter played the part of Perrin and his boss was a character called C.J, played by John Barron, and his famous line was ‘‘I didn’t get where I am today by….’’

But I will leave the last word to Bill O’Herlihy. When Bill was wrapping up a lively debate between Dunphy, Giles and Brady after a soccer international or European game, he would sign off by saying ‘‘Okey dokey, we’ll leave it there so.” n