James Connolly, a leader of the Easter Rising in 1916, was also a self-made intellectual, a lifelong socialist, and a radical labour agitator. Yet he is remembered today in popular imagination more for the way he died – wounded and propped up in a chair before a British firing squad – than he is for the way he lived, and the things he lived for.

How did that happen? An advertising poster designed less than six months after his death suggests that the process began on the walls of the New York City subway.
The poster was likely the first visual representation of his death anywhere. Showing Connolly seconds before his execution, it was designed to promote the Irish Relief Fund Bazaar, an extravaganza held in New York’s Madison Square Garden in October 1916. The Bazaar raised $40,000 for the families of those killed or imprisoned during the Rising. It was backed by a committee of prominent Irish New Yorkers, as well as some German Americans eager to solidify connections with Ireland in the United States, which was still a neutral nation in 1916.

The committee paid for the posters to be plastered in subways around the city, but once they were up, the firm hired to display them began pulling them down again, suddenly convinced they were too morbid and unfit for public view. 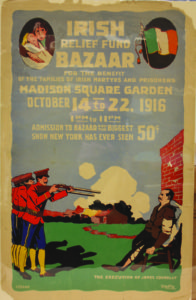 One of the backers of the Bazaar, attorney John J. O’Leary, flew into court to keep the posters up. He defended its design, accusing the advertising firm, and the subway, of being pawns of J. P. Morgan, ‘the official agents of England in this country’. Although many of the posters had already been torn down, O’Leary won an injunction preventing further desecration. More copies decorated Madison Square Garden during the Bazaar’s run.

Despite O’Leary’s defence, the poster is quite morbid, and strangely so. With its bright colours, cartoon-like figures and a boast that the Bazaar was ‘The Biggest Show New York has Ever Seen’, it looks like a circus poster. Though instead of clowns or an acrobat hurtling through the air, it shows a man about to be shot to death.
It also has a strong resemblance to the style of First World War recruiting posters, which were engineered to entice ordinary people to enlist by stoking primal fears for their homes and families, rather than to appeal to more nationalist loyalties.

Some recruiting posters in Ireland showed the fighting in Europe with an Irish homestead dangerously nearby, or depicted a monstrous looking German soldier knocking down a cottage door with women and children inside.

The images at the top of the Connolly poster – a forlorn mother and child on one side, and the rebellion’s tricolour flag on the left – show that link between home and country. Below, the walls of Kilmainham Gaol have fallen away to reveal a green meadow leading to a group of rural cottages. A closer look reveals their roofs are caved in, and a red substance that must be blood is leeching either from them back again to Connolly, or the other way around.

By evoking images of eviction and ruin, the poster linked the issues of the Land War (which had always received strong support from Irish Americans) to the bloodshed of the Easter Rising. Yet in doing so, this ‘recruiting’ poster is asking potential enlistees to defend a homeland that has already been destroyed. And instead of depicting Connolly at the General Post Office, gun in hand, this poster shows him at the deepest moment of defeat.

Who decided that this gaudily coloured image of James Connolly’s imminent death was the best way to attract New Yorkers to a giant fundraiser? Although it was reported that German-American participation in the Bazaar was considerable (sets of dolls were sold there as ‘playmates’: a German soldier in full uniform coupled with an Irish peasant girl, and a German peasant girl with an Irish Volunteer), there is no evidence to show any direct German influence on the poster’s design.

The Bazaar organisers were probably responsible, but it is also likely that they chose Connolly’s execution as a motif not because of Connolly himself, but because it made the British look so bad.

The committee members were Irish Americans involved in business, law, banking and politics who cared deeply about the cause of Irish freedom.

To promote that cause, men who would never have paused to listen to Connolly in life suddenly found that a dead socialist labour agitator could be a useful archetype.
Connolly lived in the United States from 1903 until 1910 (having visited briefly in 1902). As he travelled around the country fighting for socialist and labour causes, his activities often ran counter to the agendas of established Irish-American groups. He attacked the ‘Irish skinners of Irish labor’ in the United States, and campaigned for the Socialist Party’s candidate, Eugene Debs, in the 1908 presidential election, rejecting the Democratic Party supported by most Irish Americans.

His membership in the Industrial Workers of the World (IWW) put him at odds with mainstream labour unions, whose members and leaders were heavily Irish American. Socialism was rejected by Irish-American communities, as it was deemed godless and anti-American.

To convince Irish Americans otherwise Connolly published a newspaper called The Harp, and some of his best writing was printed there. To his regret, Irish America was not listening. His friend, the radical Elizabeth Gurley Flynn, remembered that it was “a pathetic sight to see him standing, poorly clad, at the door of Cooper Union or some other east side hall, selling his little paper. None of the prosperous professional Irish who shouted their admiration for him after his death, lent him a helping hand at that time.”

His death was mourned among poor workers in cities, small towns and mining camps in the United States where he was known as a fighter for the economic rights of all nationalities.

Middle-class Irish America, indeed America itself, had little idea who he was or what he had accomplished when news of his dramatic and brutal execution first hit the headlines.

The appearance of the Bazaar poster so soon after his death seems to suggest that those headlines had already made him more famous for his death than for anything else he had done. One other possibility exists in the search for the origin of the poster’s design. Connolly’s daughter, Nora, came to the United States in August 1916, and she raised the flags at the Grand Opening of the Bazaar. She had stood by her father’s bedside before he was shot, and had heard him tell his wife, “Hasn’t it been a full life, Lillie? And isn’t this a good end?” Nora may have had enough influence with the Bazaar committee to insist that they celebrate her father’s “good end” on the poster. If so, she could not have predicted that his death would ever overshadow his achievements as a thinker and writer, nor his life’s work among the poor and powerless. At that point in 1916, she must have assumed they could never be separated.

Daphne Dyer Wolf is a Ph.D. candidate in the History and Culture programme at Drew University. This article is based on her chapter in Ireland’s Allies: America and the 1916 Easter Rising, edited by Miriam Nyhan Grey and published by UCD Press.