James Stephens and the 1916 Rising

By Seán Ua Cearnaigh (from our April Spring Special)

Recently I have been re-reading the poet James Stephens’ splendid little book Insurrection in Dublin. First published a few months after the Easter Rising, a second edition was re-issued in 1919, while further editions appeared in 1965 and 1966. This book still remains, perhaps, the best eye witness account of the Rising. 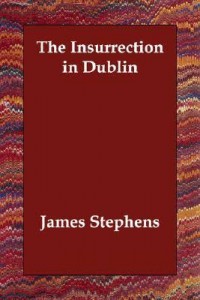 James Stephens was unique among the major figures of the Irish literary revival. He was a Protestant but, unlike his famed co-religionists Hyde, Yeats, Synge and Lady Gregory, all of whom hailed from ascendancy or semi-ascendancy backgrounds, his own background was a deprived one.
His parents were severely impoverished Presbyterians. Born in 1880, his father died when he was two years old. His mother remarried and placed him in a workhouse for Protestant orphans and never set eyes on him again. Stephens, a prolific reader, managed somehow to educate himself at the orphanage.
Lonely and unhappy there, he ran away and after much hardship and privations, found work in a solicitor’s office, he learned Irish at Gaelic League classes, wrote poems, some of them translations from the Irish, and contributed to Arthur Griffith’s paper The United Irishman.
By 1916, he was much acclaimed as a writer, due mainly to his poems and his novels, of which one in particular, The Charwoman’s Daughter, set among the Dublin slums, received much praise. An ardent nationalist with strong socialist leanings, he sympathised deeply with the Dublin workers during the 1913 Lock Out.

Although a committed Irish patriot, the 1916 Rising took him by surprise. He was then working as registrar of the National Gallery of Ireland and living in Fitzwilliam Square.
Every day as he walked to his place of employment, he witnessed some of the events of the Rising. He even on occasion, ventured as far as Mount Street Bridge, Jacob’s Factory and Trinity College.
From the outset, he sympathised and identified with the activists of what he would later describe as the most considerable of Irish rebellions and he went on to say, “I have faith in man. I have very little faith in Statesman. But I believe that the world moves, and I believe that the weight of rolling planets is going to bring freedom to Ireland.
“Indeed, I name this date as the first day of Irish freedom and the knowledge forbids me to mourn too deeply my friends who are dead.
“Is it wrong to say that England has not one friend in Europe? I say it. Her Allies of today were her enemies of yesterday, and politics alone will decide what they will be tomorrow.”

Each day during Easter Week, Stephens witnessed some of the activities of the Rising, including the fight at Mount Street Bridge and the onslaught of enemy forces from Trinity College. On Wednesday he wrote: “On this day fighting was incessant at Mount Street Bridge. A party of Volunteers had seized three houses covering the bridge and converted these into forts. It is reported that military casualties at this point were very heavy.”
Sadly, for Stephens, the Rising ended in failure and the arrest of its leaders. Some of the leaders he knew personally, particularly Tipperary’s Thomas MacDonagh of whom he wrote, “No person living is he worse off for having known Thomas MacDonagh, and I, at least, have never heard MacDonagh speak unkindly or even harshly of anything that lived.
“It has been said of him that his lyrics were epical; in a measure it is true, and it is true in the same measure that his death was epical.
“He was the first of the leaders who was tried and shot. It was not easy for him to die, leaving behind two young children and a young wife, and the thought that his last moment must have been tormented by memory is very painful. We are all fatalists when we strike against power, and I hope he put care from him as the soldiers marched him out.”
Pádraic Pearse and Joseph Plunkett were also among Stephens’ friends.
His best praises were reserved for James Connolly. He writes, “A doctor who attended him during his last hours, says that Connolly received the sentence of his death quietly. He was to be shot on the morning following the sentence. This gentleman said to him, “Connolly. When you stand up to be shot, will you say a prayer for me?‘’
“Connolly replied: ‘I will.’
“His visitor continued, “Will you say a prayer for the men who are shooting you?’
“‘I will,” said Connolly, “and I will say a prayer for every good man in the world who is doing his duty.’”
James Stephens had faith in the Easter Rising and it inspired much of his writings, one fine example being his collection of poems, “Green Branches’, published in late 1916.
James Stephens died in London on Saint Stephen’s Day, 1950. His wife, Cynthia, survived him by ten years.