Horse racing trainer Jessica Harrington turned 70 this year, and has celebrated her most successful year on the racing track to date. She tells Kay Doyle about the highs and lows of her very interesting life, and how she became the ‘First Lady of Irish Racing’.

It’s been an extraordinary year for the “First Lady of Irish Horse Racing”, Jessica Harrington. Not only did she celebrate one of the best days in her racing career when Sizing John won the Cheltenham Gold Cup in March, but she subsequently swooped to conquer in the Irish Grand National with Our Duke, and Sizing John once again emerged victorious in the Punchestown Gold Cup. 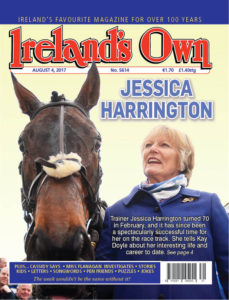 But while racing has played a major role in the life of Jessica, there are many other memories that flood to her mind as she celebrates reaching a milestone birthday earlier this year, and in particular the marriage to her late and dear husband, Johnny.
“Our wedding was a very low key affair in a registry office with family and just a few friends,” she recalls. “I remember we were walking down the steps out of the office afterwards and I tripped and fell down the steps and cut my knee. I had to go off and buy a new pair of tights before our wedding lunch!”

Highly respected horse trainer Jessica smiles as she fondly remembers day one of over 37 years of marriage to Johnny. Sadly he passed away in 2014, but having turned 70 in February, Jessica keeps going, full of spirit, and surrounded by her family at their Commonstown Stud in Co. Kildare.

“He always says he was hanging around waiting for me,” she laughs. “I met Johnny originally when I was 18, we went out a couple of times, but then I went one way and he went another. I got married and went to live in England. Then when my marriage ended I met up with him. He was a great friend of the family anyway so I used to see him, but that was it.

“It never crossed my mind that we’d marry but when my marriage ended, things changed and so that’s why he always used to say he was ‘hanging around waiting for me’.

“It was like any normal marriage. Nothing is idyllic. We had our ups and our downs like all couples, especially after 37 years. It takes work when you have children too. When you look back at it you remember the good times but you forget the harder times, it wouldn’t be life.”

Continue reading in this week’s Ireland’s Own (issue 5614)