In an extract from his autobiography ‘It Has to be Said’ Father Brian D’Arcy pays tribute to much-loved commentator, Jimmy Magee, and shares memories of lining out at left-back on the Jimmy Magee All-Stars football team 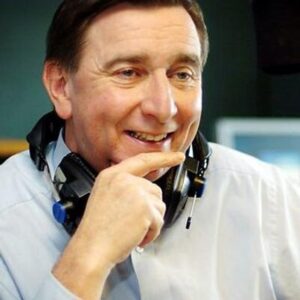 Support for worthy causes has always been a part of the Irish psyche. For fifty years the Jimmy Magee All-Stars were Ireland’s most enduring band of brothers raising millions for charity.

I was a member of the Jimmy’s All-Stars from 1972 – a few years after I was ordained a priest – and remained with them for 43 years. The experience made me the priest I am. Mixing with them and with the people they helped taught me about life, about people, about generosity and above all, genuine humility.

Every summer, we travelled the length and breadth of Ireland; we played a fun football match with some local celebrities, and then put on an All-Star concert organised in aid of a local charity. We had fun; they made money.
The Jimmy Magee All-Stars were drawn from well-known footballers, famous singers and not so famous performers from the world of entertainment; anyone in the public eye willing to make a fool of themselves on the football field was welcome. Every single penny earned went directly to the charity. None of us took any expenses.

They met for the very first time on the 6th June, 1966, in Ballyjamesduff in Co. Cavan and it was organised by the late Connie Lynch. On that night it was followed by a cabaret in the local St Joseph’s Hall. The idea was to bring sporting legends from all sports together to play a Gaelic Football match.