Joseph O’Connor and his love for writing

Thomas Myler meets the ‘Star of the Sea’ author

It seems only natural that Joseph O’Connor would become a writer, and a best-selling one at that. As a child and teenager he was fond or reading. His father Sean, a structural engineer later turned barrister, had a passion for Victorian poetry and opera, and his mother Marie was a devotee of Oscar Wilde and Kate O’Brien. 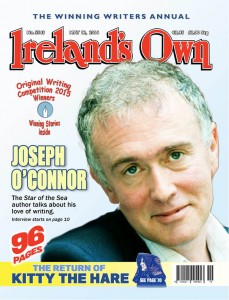 Their house in Francis Street, one of the oldest parts of Dublin known as the Liberties, was full of books by the likes of W B Yeats, Brendan Behan, Kingsley Amis, Frank O’Connor, Liam O’Flaherty, Grahame Greene and the like.
‘I can remember wanting to be a writer when I was a young child, about nine or ten,’ he says over coffees in a cafe near his home in Killiney on Co. Dublin’s scenic east coast. ‘I was one of those children we see all the time, ones who enjoy that imagery world, the world of storytelling.
‘It was in my late teens that I decided to try for journalism. I wrote pieces for the Sunday Tribune and Magill magazine but my heart wasn’t in it. In those days I would have much preferred to be a writer of fiction.
‘The turning point was when I read John McGahern’s collection of short stories and The Catcher in the Rye by J D Salinger about teenage rebellion that I wanted to become a novelist. I would have been around 17 at the time.