My father never took to John McCormack’s voice, even though he owned at least eleven of those old black acetate HMV recordings of the tenor from Athlone.

Dad never refrained from telling people that McCormack was a Papal Count and that, as such, the correct way of giving him his title was not Count John McCormack, but John Count McCormack. 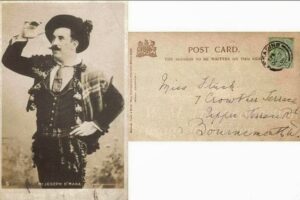 Further, he delighted in telling the anecdote about how, when McCormack stood looking into Tiffany’s window in New York one day, a male voice behind him said, “And how is the world’s greatest tenor today?” And how, when the Irishman turned around, it was to see, smiling at him and walking towards him with his arm extended ready to shake hands — none other than the great Enrico Caruso!

“What a compliment that was!” Dad would say, “coming from the man who was at that time publicly acknowledged as the greatest-ever operatic tenor.”

But, for my father, McCormack’s voice sounded “too thin, there was too much of a ‘min-yaw’ in it… Mind you,” he’d say, “McCormack sang ‘Il Mio Tesoro’ from ‘Don Giovanni’ with more breath control than any other tenor before him, or since.”