I began what was to become a life-long love affair in the 1970s. Sitting in class one day, a classmate mentioned a new TV programme. Those were the distant days of one-channel land, namely RTE 1, and any new series was fallen upon with eager enthusiasm.

She mentioned ‘Poldark’ a historical romance set in 18th century Cornwall. I tuned in the following Thursday. 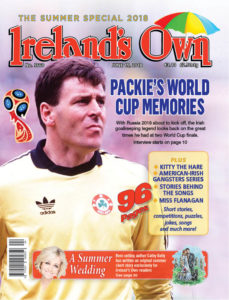 It was a ‘coup de foudre’. I was entranced from the beginning and never got over it.
I fell in love with swashbuckling, lean, dark, saturnine, scarred Ross Poldark played by Robin Ellis. He became my hero. Everything I thought I ever wanted in a man.
Handsome, strong, a man of great integrity, loyalty and courage but also a renegade to his class.

I was enthralled by the love affair between himself and his feisty wife, Demelza, played by Angharad Rees.

I lived for Thursday evenings to follow their happiness, adventures, heartbreak and travails all set against the tempestuous background of the wild Cornish countryside.
I hated Ross’s arch enemy, George Warleggan and despised Demelza’s love rival, Elizabeth.