Just A Memory – Dancing At The Galtymore

For countless thousands of Irish emigrants to London during the 20th century the Galtymore in Cricklewood was more than just a dance-hall.  It was a ‘home from home’, a piece of Ireland where each weekend they could meet Irish friends from all over London, hear the music from the Irish country and showband scene and, better still, get to see the showband stars in person, writes Patricia Roche

After many years of being away, I recently made a trip to Cricklewood and was struggling to find my bearings in a place I used to know so well. This was the hub of Irish activity back in the 1970s. We were all over the place. Nowadays we would probably be called ‘the diaspora’, but back then we were just a bunch of Irish lads and girls having the craic.
There were numerous Irish pubs along Kilburn High Road leading to the infamous Cricklewood Broadway and just beyond was the iconic Galtymore dance-hall where we all congregated at the weekends.

‘The Galty’ was one of it’s kind, massive, sporting two huge dance-halls, a céile band played in one and the big showbands in the other. You could alternate between the two but if you were of our generation, you wouldn’t be seen dead in the céile side!

There were bars upstairs serving alcohol as well as minerals and balconies all around. You could look down on all the action. Chandeliers hung from the tall ceilings to add to the glamour. This was the place where many romances began with the words “Will you dance?”

You wouldn’t want to get there too early as the main band didn’t start much before 12:00 o’clock. This suited the publicans who were only licensed until 11:00pm so when chucking out time came, there were few objections as intoxicated customers would head for the Galty.

There would be a relief band from about 9pm and gradually older couples would hit the dance-floor. Nobody wanted to be the first out, so if we got there early we’d clan up in the ladies gossiping and trying to make ourselves look glamorous.

The Galty hosted many famous show-bands like Big Tom, Joe Dolan, Brendan Shine and Margo and would often be rammed to over-capacity. It was wonderful to get to see these great performers for the price of the entrance fee which was around 50p (ten shillings), about £15 in today’s money – nowadays it costs much more to see entertainers live.
As the main band got going, the floor would fill up with couples dancing, jiving, waltzing, whirling around underneath the strobe lights, even girls dancing around their handbags. Each dance lasted three songs, either fast or slow numbers. As the dances were announced, we girls would line up along one side and the boys walk up and down inspecting and choosing their partners and asking ‘Will you dance’.

If you liked your partner, or if he was a good dancer, you might stay on for another dance or two and a keen lad might even offer to buy you a drink. Many guys stayed in the bars all night until the last dance was announced, then there would be a mad scrum to get a partner and get out on the floor.

At nearly every dance a scuffle of some sort would break out and the big bouncers had to separate and eliminate the perpetrators (I blame the drink!) When the last record was announced before 2:00am, there were shouts of ‘more, more’ and the band leader usually introduced all the members and we gave each of them a big round of applause.
They would play another song or two then ask us all to stand for the National Anthem. By then many guys were drunk and half-asleep so their friends would prop them up as it was a sign of disrespect to be seated during this rendition.

In many ways the Galty was a place of sanctuary where emigrants could meet up at the weekends and enjoy familiar songs and music. These were the pre-Ryanair times when many could not afford to go home.

Young men often became involved in a drinking culture that sapped all their cash. You couldn’t really blame them because they worked so hard, manual labour on the buildings and roads and often lived in small rooms sharing with others so the pub was a welcome reprieve.

Despite the changing musical tastes of the next generation, the Galty made it through the 1980s into the 1990s but no longer attracted a large younger crowd, despite all the efforts made, including offering a disco. 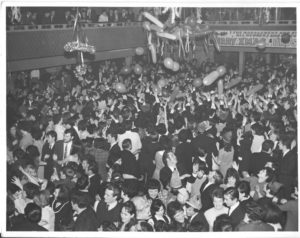 It continued to be a great place to socialise and dance, especially for us emigrants, but of course we grew older and it became harder to stay awake until two o’clock in the morning, eventually it became no longer viable. I was sad to hear it was closing down permanently and worse still, being flattened to the ground to make way for a new development, but can sentiment ever stand in the way of progress?

This was the end of an era, a time of innocence and happiness that will never come again. We were young, didn’t have a penny in our pockets, but still knocked out a great old time. You could do that then as living in London was cheap and unemployment rare. The Galtymore brought us all together, you would meet other Irish people from all over London.

The Galtymore had opened it’s doors in 1952 and, despite facing local competition from the likes of The Buffalo in Camden Town, The Gresham in Holloway Road, The Forum in Kentish Town and eventually The National in Kilburn, retained its status as the main social headquarters for the Irish in London until it finally closed in May 2008.

The Celtic Tiger in Ireland had afforded the young generation the luxury of being able to stay there and many of the older ones had returned home.

At Kilburn station on my way home that day I saw a thought for the day on the notice board saying we don’t appreciate a moment until it becomes a memory. How true. I have many great memories and a lot of sentiment towards the Galtymore, being young, meeting friends and feeling welcomed, being part of the crowd, dancing on the wooden floor and, best of all, meeting my husband there!