Just A Memory – In Search of Simnel Cake

My mother shook her head and, with a look of total dismay on her face, repeated what the shop assistant in Troy’s Bakery told her – “No Simnel cakes left.”

“None.” The girl said firmly. “Is there anything else I can get you?”

My mother tightened her grip on my hand and, without another word, turned away from the counter and pushed her way through the packed shop out onto Patrick Street, Limerick, dragging me after her.
‘No Simnel cakes’ – she kept muttering to herself.

Even I knew this was a disaster with a capital ‘D’ – Simnel cake was my uptown grandmother’s favourite and it was a tradition also.
My mother bought one for her every Easter. I couldn’t understand why grandmother loved these particular cakes. To me Simnel cake was like Christmas cake without the lovely white icing – it simply had a topping of yellow marzipan that I absolutely hated.

But uptown grandmother’s wishes had to be granted – a Simnel cake had to be found.
Mam and I traipsed up through Limerick City trying every confectioners and bakers from McNamara’s in Mary Street to Keane’s in Parnell Street until – finally – there on the window of ‘Kakes and Kandies’, opposite the Augustinians in O’Connell Street, was the blessed Simnel cake.

The day was saved but in that uptown confectioners it cost Mam an awful lot more than it would have in any of the downtown bakeries.

I don’t ever remember celebrating Mother’s Day as a child and doubt if my mother knew that she was upholding an ancient tradition when she went searching for grandmother’s Simnel cake.
The confectioners of Limerick got it right and baked those special cakes for the few who remembered to celebrate Mothering Sunday.

Mothering Sunday is the fourth Sunday in Lent and so called because it was the day when servants and apprentices of the ‘big houses’ were given a rare holiday in order that they might visit their parents and their homes.
It suited people in those houses to let off their servants on that particular Sunday so that they would be back at their posts in time for the Easter preparations.

The servants were mostly young people and before they left for home, they attended church services and had the little gifts of flowers and Simnel cakes blessed by the priests.

Simnel cake was originally a concoction of plum cake mixture, heavy with fruit and peel, all cooked inside a pastry case. Servants had to make do with whatever ingredients the cook of the big house could spare, and to make it look tastier it was always decorated with marzipan. 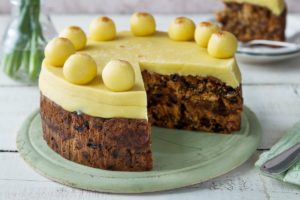 For hundreds of years these cakes have been associated with Mothering Sunday; in fact, in some places, the day itself was called Simnel Sunday.And how did that cake get its name? Nobody really knows.

One legend tells of how an old man named Sim and his wife Nell, who first thought of the mixture, quarrelled violently as to whether it should be baked or boiled. Eventually they compromised and used both methods, boiling the cake first then finishing it off by baking it in the oven.

They called it after themselves – Sim and Nell – Simnel. Historians, however, say that the name has a much older origin and dates back to some religious rite of pre-historic times.
Whatever their origin, Simnel cakes were made in mid-Lent from the Middle Ages onwards and proof of this is Robert Herrick’s little verse, written sometime around 1620: –
I’ll to thee a Simnel bring,
‘Gainst thou go’st a mothering;
So that when she blessed thee,
Half that blessing thou’lt give me.
And isn’t it strange that my mam and grandmother’s favourite Simnel cake got it so right for Mothering Sunday, alias Mother’s Day.