When I was a kid in the late 50’s, eight or nine at the time, I attended my first wake. Someone from my mother’s side of the family had died and the whole family traveled up the country to the village of Killcommon to attend the funeral. 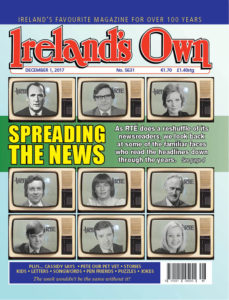 Back then, pre social media, most people caught up with each other at weddings or funerals. Mostly at funerals, of course, as weddings are by invite. Very few people had telephones and cars were a non-essential to most families. Consequently, many people attended funerals not only to honor the deceased, but to see friends and relatives not seen for many a year.

After the service, everyone migrated to the local pub to remember the deceased and just to catch up. It’s a known fact that you never hear a bad word about the dead in an Irish pub after a funeral. It’s amazing, when you think about it, what wonderful people we become in death even if we be scoundrels in life!

As the youngest in our family, I had to accompany my mother while she caught up with cousins and friends. Being a curious little fellow, I wondered off when we reached the pub. The drink of choice of most of the men seemed to be a pint of Guinness while most of the women and kids were drinking Lemonade or Orange Crush.

I was totally mesmerized watching the barman pull a pint of Guinness. It was magic the way every pint looked the same. People were patting me on the head and acknowledging my presence when one uncle asked me if I wanted a Lemonade or Orange Crush. I hesitated a second and then asked him if I could have a sup of his Guinness instead.

“Go away outa that” he said. “Do you want your mother to kill me or what.” Why is it that grown Irish men are more afraid of Irish mothers than fathers?
“Ah, go on” I said. “Just a little sup”.

All of a sudden, he got a mischievous look on his face and he looked around to see where my mother was. Seeing that she was way over at the other end of the pub, he beckoned me over to a corner, looked around to make sure no one could hear him, and whispered that if I didn’t tell anyone he would get me my own glass of Guinness.
I swore that I wouldn’t tell a soul. He nonchalantly walked up to the bar and called the barman over. After a bit of whispering, the barman looked at me, looked to see where my mother was and then gave me the conspiratorial nod and wink.

He pulled a bottle from under the bar, opened it and poured it slowly into a high glass. I saw the dark stuff forming at the bottom and the creamy looking white head forming at the top and I began to sweat, keeping one eye on the barman and the other on my mother.

After a minute or so, the barman handed the glass to my uncle who put it under his coat and headed in my direction. He gave one last look in my mother’s direction before slipping me the glass. He told me to go outside and find someplace quiet and drink my Guinness slowly and if anyone asks, for God’s sake, don’t mention him.
He then gave me the thumbs up and nods me on my way. Making sure no one was watching me, I went outside and found a vacant bench at the side of the pub and started my very first pint. Feeling like an adult, I took my first sip and liked the sweet taste and loved the feel of the creamy white part.

It took me about a half hour to finish my pint and I’m feeling good. I got up slowly preparing for the staggering and singing I’ve seen so often after a few pints.
Nothing! Absolutely nothing!

I felt just the same. No urge to break into song and after walking back and forth a few times, not a stagger in sight.

“Japers” I said to myself “ I’m going to be a powerful drinker when I grow up”.
I went back into the pub and as I passed the barman and my uncle they both gave me the conspiratorial wink and a thumbs up. I told no one about my Guinness adventure on the way home as they kept asking me why I had a stupid grin on my face.
About a month later, just before Christmas, I am out with my mother Christmas shopping when we stop in to the local chip shop for something to eat. She asks me if I would like to try a Coca Cola with my chips. I had no idea what a Coca Cola was so I said sure.

As soon as I saw the Cola in the glass I knew immediately that I had been ‘had’ by uncle and the barman at the funeral and the taste confirmed it. My mother looked at me and with a big smile on her face gave me the wink and the nod!
You can never put one over on an Irish mother – they know everything!