Just A Memory – My First Meal Out

Eating out wasn’t the done thing in the 1950s, writes Sheila O’Donovan

Not many people ate out in the Fifties. It was only done on special occasions such as when an American relative came on holiday or for a family celebration of some kind. Only adults ate out, children were never taken to restaurants as few families could afford to take their offspring with them.

The first time I ate out was a special occasion in my family. My brother, who had joined the De La Salle Brothers 4 years earlier, was about to enter his spiritual year and before his 12 months of silence began, he was allowed a family visit. Brian was four years older than me and had left the house when I was 11 and I hadn’t seen him since. 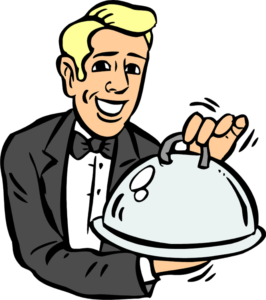 My parents and sister had visited Brian twice in the intervening years but, as I was the youngest, I was always left at home. Now, at the age of nearly 15, I was considered old enough to make the 100 mile journey to the Novitiate in County Waterford.

My father used to save up all year round for these trips and, as he didn’t drive, he would hire a car and a driver he trusted for the day. This was the only way we could access the isolated locations in which my brother’s religious communities were situated.

My Dad, who was a man who preferred one good day out to a dozen poor ones, would put aside extra money for a meal en-route. He always tried to make these yearly visits memorable occasions as they were the nearest thing my family ever got to a holiday.
At the time the choice of eating establishment was very limited. There were no fast-food restaurants or pub-grub. Even if the latter had existed, my mother would not have entered a public house as only low-class women were seen in pubs at the time. The usual place to eat was a hotel restaurant, which was considered quite sophisticated.

It was a lovely August day as we set out in the early morning on the long drive to Cheekpoint. A gentle breeze blew through the open windows caressing our faces as we drove down the country roads. Around 1.00 p.m. we pulled up outside a hotel in Portlaoise. There were no double yellow lines or parking restrictions back then.

Our party of five was escorted to a table in the dining-room which was covered with a pristine white tablecloth and bedecked with silver cutlery. Starched white napkins in tent formation stood like soldiers by each place setting with ashtrays strategically placed near the adults. A centrepiece of artificial pink roses in a glass vase was flanked by a silver cruet set.

The atmosphere in the room was that of a mausoleum with blank faced waiters going to and fro, a handful of business men in suits and tall dusty palm trees in ceramic pots looming over us like sentries. The heavy green curtains were closed to keep out the sunshine and artificial light came from the electric-light fittings overhead. The air was heavy with the stench of cigarettes and the aroma of cooked food.

To my surprise a waiter pulled out a chair for me to sit on, but as I wasn’t used to such niceties, I lost my bearings, missed the chair and fell to the floor! My giggling, together with my sister’s, was quickly silenced by one look from our mother!

My parents choose the menu for our party: oxtail soup followed by roast lamb, boiled carrots and new potatoes, with apple tart and ice-cream to follow.

As I looked around the stuffy dining-room, I was taken aback by how stiff-and-starchy everybody appeared. Underneath a large framed hunting print on the wall, two elderly ladies dressed in twin-sets and pearls chatted discretely with each other.

The murmur of quiet conversation, in accents I had never heard before, was punctuated by the odd guffaw as the staff went about their business serving the diners with steaming platters of cooked meats and vegetables, gravy boats, and containers of boiled and mashed potatoes.

When the lamb was served, I noticed something on the side of the plate that looked remarkably like jam. “Why are we getting jam with our meat?” I asked my mother. I was not the most tactful of children!

Although the meal was nice, it wasn’t a patch on my mother’s wonderful cooking. but I didn’t dare tell her, as I would have been given a lecture on how much the lunch had cost. In the Fifties a meal eaten out was considered to be superior to one eaten at home and could be talking point for weeks to come.