Just A Memory – My Night out on the River Nore

We often talk of the pursuit of pleasure. We say things like ‘Have a good day’, or ‘Let’s have a night on the town’. And most of us have complied with some or, maybe even, all of these suggestions, at one time or another. But I remember a great night out with a difference. Not a part of the night, but the entire night. And it wasn’t a night on the town and I was only nine!

My night to remember was back in the 1940s when cot-fishing for salmon, a trade soon to end, was still permitted on the Nore. So my father, who always had two cots and a crew for fishing, decided to take me along to give me a lasting memory of the river at night. The cots were fishing boats, shaped like canoes and propelled with paddles. 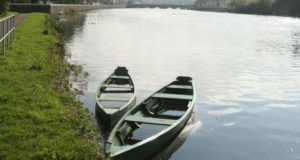 The crew met at sunset that lovely summer evening. My mother protested loudly about my involvement. She was nervous that anything unforeseen might happen to me, her only child. But Dad had decided to give me an awareness and appreciation of the river which was so much a part of his life.

So, as dusk fell, armed with net and paddles, four seasoned fishermen and I headed to the cots at Polly’s Lane.

Having left our moorings we were carried through the sweeping arch of the bridge as we headed for the deeper water downstream. Solitary trout anglers were still on the banks, dark figures whose presence was sometimes betrayed by the glowing tip of a cigarette. As a white mist spread along the river like a ghostly form, these anglers were hoping to lure the late trout whose occasional plops we could still hear.

There were many sounds of nature all around us. I heard the high piercing call of water hens as they settled for the night in their little floating homes in the reeds and rushes. There was the occasional agitated quacking of a duck as some danger threatened her little brood but by degrees silence descended as if the whole world was asleep.

We had become completely enveloped in a ghostly fog. But, rather than being the frightening experience that I had expected, this fog had a soothing effect. It was as if we had glided out of our known world and were now in some magical place where we were the only inhabitants.

By now the river was all ours. The cots had moved apart to cover a wide expanse of river as the nets were played out. We drifted silently along with only little ripples breaking on a glasslike surface. The net men remained as silent as their gliding boats, a habit they had learned, to avoid disturbing the wary salmon.

The only sounds were the muffled but well recognised instructions ‘fast’ and ‘pull’. ‘Fast’ indicated that the net had to be lifted ‘fast’ to avoid an obstacle deliberately placed in the river bed by some fishery owners.

These well-known obstacles, I learned, were concrete blocks with protruding iron bars that would tangle the nets and damage them. They were put there to ‘discourage’ netting for salmon on their waters.

The word ‘pull’ was used when one of the men holding the net felt a salmon hit the mesh and the net was hauled in as the boats came quickly together and the salmon was taken aboard and killed with a practised blow of a ‘smachtins’.

This was a wooden truncheon used to kill the fish in case it would escape when it was untangled from the restraining net.

The night was an exceptionally successful venture and, like the Bible story, there was ‘a miraculous draft of fishes.’ Little wonder that neither men nor child felt the night passing. It was, in fact, the early rays of the rising sun, dispersing the retreating fog, that told us it was time to haul in the net and head for home to a welcome breakfast.
We had two sacks of silvery salmon, a goodly reward for each man for his night’s work. But, as we trudged the river bank through the wooded shade and finally come into the early morning sunshine of the open fields, my thought was of a wonderful night spent in a magical world.

It was a night to be remembered – but never repeated- because the death knell was soon to sound for my father’s much-loved trade. I have never forgotten that night, a night of wonder and adventure, a night of observation and learning close to the marvels of nature.

And at the end of it all there was a triumphant re-entry into the bright, beautiful world from which we had vanished, swallowed up in a fog, many hours earlier.

Read memories of old Ireland every week in Ireland’s Own