One day, in my late teens, I noticed something odd about a house down the street. All its small-paned windows were open, which had never been the case in my memory.
The hall door was open too, making visible the huge bluey-grey painting of a ship in a stormy sea to anybody passing. I could hear men’s voices as they shouted to each other, and the noise of things being dragged around.

Then I remembered: old Nora, who had always lived in this house, had died the previous week, and now her house was being cleared out. I remembered her well. She was a kind woman who had never married, and lived there with her sister who had died a couple of years earlier.

A neighbour from across the street walked over to me as I stood looking at the house. “God rest poor oul’ Nora,” she said. “Paudie and Ned are in there clearing it out now, but do you know, six lorry loads of furniture already came out of that house for an auction,” she said, before walking on. “Six lorry loads from a house that small! Would you believe it!”

Paudie was the local chimney sweep and general handyman, and Ned was his sometime assistant, both well known to everybody in the village. I couldn’t resist walking into the hall. It led down to the back kitchen, with a room on the left and another one behind it. 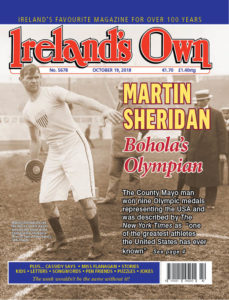 ‘Hello, girl,’ said Paudie, from the front room. He stood in his huge sack apron, ankle deep in newspapers that spread across the floor. Perspiring and cursing, he packed them into big plastic bag.

“Look at ‘em,” he said, holding up a bundle and pointing to the yellowing folds. “Forty years of newspapers, and hardly any of ‘em opened.”

Ned came in from the back room. He also wore a sack apron. He picked up a couple of the newspapers and read out bits of news from long ago, in a careful voice for Paudie’s entertainment and his own.

Then they picked up old books from the pile and put them into a separate plastic bag. They’d go to the Convent, Paudie said, because the nuns might have use for them.
I went back out into the hall and saw cardboard boxes stacked all down the sharply angled stairs, full of stuff to be thrown out.

Nora had kept paper cuttings, old medicines, with the prices still on the bottles, framed photos of unsmiling people in stiff poses, oil lamps which still smelt of oil, dozens of boxes of good matches, and small plastic bags full of used ones which mystified Paudie.

“‘Tis a wonder the place didn’t go up years ago,” said Ned, looking over his shoulder at the matches as he went out to the hall. He began to lift the boxes off the stairs and carry them out to the hall door. A piece of green unfinished knitting fell out of a box as he passed me.

He kicked it into a pile of old clothes near the door. On his way back, he picked up a piece of paper that had also fallen out and read it aloud. It was a bill from the Post Office for newspapers – 13/1d.

“Now that’s a quare wan,” he shouted to Paudie, laughing. “Sure it wouldn’t pay for a bit of ‘em’!

A lorry then pulled up outside and the driver jumped down and came into the house. This was Joe, another handyman who seemed to be around everywhere. He stopped for a few moments in the hall to look at the painting.

Then he called out, ‘Are ye right, lads?’

They came out, and he helped them to drag out the plastic bags, the boxes and the old clothes and dumped them all into the back of the lorry. They didn’t take the painting, and it hadn’t gone with the furniture to be auctioned. I wondered what would happen to it.

Then they went back inside, where the noise of their boots now echoed eerily as they pounded on the stairs and down towards the back kitchen, shutting all the windows and, as I left, they locked the hall door. They jumped into the lorry and I watched as they drove away, disappearing around the corner at the top of the street.

The next day, as I walked out a bit from the village on the road to an orchard to buy apples, I noticed something odd just inside the ditch across the road, near a little pond where cattle used to drink. It was a pile of rubbish, just dumped haphazardly over the side. I recognized it because dangling from a briar, and half off the needle, was Nora’s knitting.