In an age in which television, mobile phones, internet, Facebook, Skype, etc., etc., provide so much access to communication, let’s look back to a few decades ago when the radio, or the wireless as it was once popularly referred to, was one of the few means of keeping up with the main news stories from at home and abroad.

When a young boy, I can recall one or two newspapers coming into my home in County Meath seven days a week and in 1956 our first radio arrived. Before that visits were made to neighbouring houses to listen to GAA matches and big horse races with the inimitable Michael O’Hehir describing the action from the games and races on Radio Éireann.

Getting the first wireless gave us access to an interesting variety of programmes with BBC Light and Radio Luxembourg other stations listened to. In those days radio stations were not on air for near as many hours as these days. 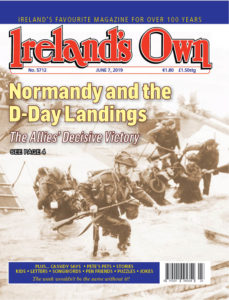 Among the home-produced light entertainment weekly programmes I remember include ‘Take The Floor’ and ‘Living With Lynch’. The presenter of ‘Take The Floor’ was a man called DJ Fitzgibbon, a Cork-native who lived in Dublin and was prominent in the motor business in the capital city.

The popular programme provided a mixture of music, song, jokes and one of the unusual features was listening to Rory O’Connor dancing. Many felt it was rather odd to hear dancing on the radio!

Joe Lynch, later to play a starring role in the ‘Glenroe’ television series, was the main man in ‘Living With Lynch’ with Charlie Byrne and Ronnie Walsh also playing prominent parts.