I caught the 15A bus into town that late afternoon in February, 1972. Pele was in town. His club, Santos, were to play a combined Bohemians and Drumcondra team in an exhibition game.

I knew that all the top teams visiting Dublin stayed in the swish Gresham Hotel in O’Connell Street. I knew, too, that the doormen there were always ready for scruffy young autograph-hunters who dared to step through the door.
My friends and I had often been evicted, but that night I was a ‘lone wolf’ and I hoped that one fan might just slip in undetected.

The coast was clear and in I went and looked tentatively around, wondering where Pele was likely to be, wondering if I dared to dart up the sweeping staircase to search him out. 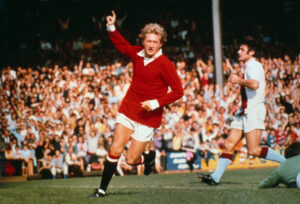 “Can I help you?’’ the doorman had materialised out of nowhere. Deciding that honesty was the best policy, I told him I was hoping to get Pele’s autograph. He glanced around surreptitiously, nodded towards a corridor and whispered “he’s taking tea in a private sitting room along there.”

I garbled an astonished ‘thanks’ and knocked on the sitting room door. “Come in,” a voice called and there he was, the man himself, sharing a pot of tea with his wife. And what a charming man he was. He happily signed the notebook I called my ‘autograph book’ and chatted as if he had all the time in the world to talk to a scruffy Dublin teenager.

The 1968 European Cup winners, Manchester United, were regular visitors to Dublin and we all wanted their autographs with (Bobby)Charlton, Law (Denis) and Best (George) being the most sought-after scrawls. They were as elusive as unicorns and many an evening spent staking out the Gresham Hotel proved to be fruitless.
One such evening the hotel foyer was crowded so I slipped in unnoticed amongst the throng and was rewarded by the sight of Pat Crerand and George Best coming down the staircase.

I raced up to meet them and both happily signed my notebook but without the ease and rapport of Pele, just a scribble, a nod, and I was off out the door clutching my prize.

On yet another evening when we hadn’t been able to breach the Gresham doors, a slightly tipsy gentleman came swaying from the bar next door. Seeing our notebooks and disappointed faces he stopped.
“If it’s United you’re after, they’re in there,” and he waved in the direction of the bar he has just left. We thought that a gaggle of underage football fans had no chance of being welcomed there but went in anyway.

The atmosphere was thick with smoke and conversation. The barman glanced up from pulling a pint, grinned and returned to his task as if he hadn’t noticed his unusual Friday night customers.

It wasn’t the whole team but there were enough of them to thrill us that Friday night. They were perched on stools, leaning on the bar and were very happy to sign our books with a smile.

Before the manager escorted us to the door I had the autographs of Matt Busby, Alex Stepney and the one I coveted most, Denis Law. I now had Best and Law and needed only Bobby Charlton to complete United’s ‘holy trinity’ but he had not been in the bar.

Having waved goodbye to my friends, I was just crossing O’Connell Bridge when I saw him walking towards me. Bobby Charlton! I wasn’t the only one who had spotted him for, as he dutifully signed his autograph there was the crack of a flash bulb and the photographer who roamed the city streets snapping revellers gave me his card.

It was only when I collected the photograph a few days later that my friends believed that I had really met Charlton and so possessed the three most coveted United autographs, Charlton, Law and Best.

I had another football souvenir my friends envied, one of the footballs thrown to the crowd by George Best when he came to Dublin to open Penneys Food Hall in Henry Street in the summer of 1970.

I had jumped as high as an Olympian to catch it, hugging it close in the surging crowd. I kept it safe with my autographs but eventually decided that such a ball deserved to be used. I still have it although it bears the scars of many kickabouts in Palmerston Park, including a night marooned up a tree until I persuaded Da to climb up and release it next morning.

Pele’s signature was the crowning glory of my autograph collection. United had new stars by then but they somehow didn’t shine as brightly for me so my notebook was laid aside but memories of those great players live on. ÷