Just A Memory – The Pope’s Detective

In 1979, Pope John Paul became the first Pope to visit Ireland. All garda leave was cancelled for the length of his visit. I was a detective attached to the Scenes of Crime Section of The Garda Technical Bureau. 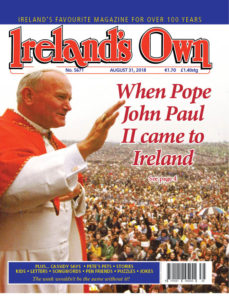 The day before the Papal Mass all the gold and silver chalices and other Holy Mass vessels were escorted to the strongroom by a number of armed detectives.
An armed cordon was placed around the area by gardaí and the Irish army. My colleagues and I were placed on the steps of the massive cross, and nobody without a garda permit as allowed near the cross.

We were on duty from 8pm until whatever time the Mass finished the next day. The evening faded into night and some reporters and T.V people were prowling around the security barriers, and being checked by detectives.