Just A Memory – When Saturday Comes

“Tommy, stop acting the eejit and come in here and get your tea”.  My mother has spoken and Daddy has already taken the rolled up newspaper from his forehead that is part of his Dalek impersonation.

“You two are getting ex-ter-min-ated after I get me dinner,” he rattles off staccato-style, and with that he disappears off into the dining room.

It must be Saturday. William Hartnell as the ‘new’ Doctor Who has just met the metal monsters for the first time and our Dad is as big a fan as my brother and I. 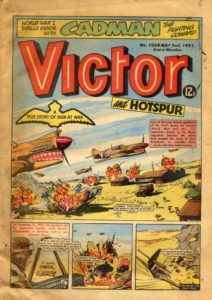 The children’s sci-fi programme is becoming a habit for this 40-something man. Just a few weeks ago he was clicking his cigarette lighter on and off and shouting ‘make fire, make fire’ just like the cavemen the good doctor had met in an earlier episode.
My brother and I laugh at this ‘eejit’ almost constantly. None of our friends has a Dad like him. We wish he didn’t have to work such long hours, but then maybe they have something to do with that wish.

It has been a great day. Friday evening’s pocket money is long gone. Saturday morning found me, as always, in the local sweet shop with a sixpence spent on two comics, the ‘Victor’ and the ‘Hotspur’. Brother Hanley says they are ‘English’ and should be avoided like the Black Death, but our Dad is an ex-Royal Navy man and his stories about the war are always funny and full of jokes.

Footballing hero Gorgeous Gus, Braddock VC and Alf Tupper, the ‘Tough of the Track’, who eats fish suppers before running snobby athletes into the ground, are as real to most Belfast ten-year-olds as anywhere else in country.

When read from cover to tattered cover, both comics will be swapped for the ‘Valiant’ and the ‘Rover’ and Captain Hurricane, Sexton Blake and Wilson the Wonder Athlete will see us half way to another Saturday.

The big day has its own rituals. My mother is obsessed with what she calls the safety of our souls. It is imperative that we go to Confession every Saturday morning and so that is what we do.

Time is spent outside St John’s chapel rehearsing sins, at least three, that will be told to the elderly priest. He is kind and gentle and not at all like some of the others who look fierce and as if they will bite.

I usually settle for telling this grandfatherly old man that I lied, was disobedient and took the Lord’s name in vain. Each week he clears my account with a penance of three Hail Marys. One for each misdemeanour.

It is a wee bit mechanical, but I feel cleansed and a little more safe of soul and ready for Heaven as I head for the afternoon show at the Broadway Cinema. We call it the ‘flicks’ and try to get there as often as money will allow. We buy our sweets, sometimes only a penny’s worth, outside the cinema where they are a lot cheaper and look forward to two and a half hours of darkness transformed by magical light.

Sometimes the Three Stooges, already well into middle age in 1963, will make custard pie throwing an Olympic sport and the Pathe News has just shown us the Beatles in colour for the first time. For some reason, they sound even better than they do in black and white.

And always there is the main feature. The ‘Long Ships’ the ‘Vikings’ and the ‘Fighting Prince of Donegal’ have us on our feet waving imaginary swords and driving on our heroes, choreographed feet stamping like maniacs, until the beam of the usher’s torch brings a sort of subdued silence.

I look back and see the lads in the balcony. They are ‘home boys’ from the reform school near the mountain. Each week we watch as they are herded, sometimes 200 of them, short-trousered and shaven- headed down the Falls Road for their one afternoon out.

They remind me now of the prisoners being marched to the exile ship at the start of the film Papillion.

I feel sorry for them, but my brother wants to know, ‘how come the mitchers get the best seats?”

Saturday is a day for comics, Confession and the cinema and maybe Dad, with a tea towel on his head, imitating the Wolf of Kabul. A happy day.

Read memories like these every week in Ireland’s Own