My father had decided to go to the city, and had taken me with him. I was just about to enter my teens. He wanted to acquire some clothing and footwear for yours truly and the other offspring. With the shopping complete, my father then concluded that it was time for him to confess his sins.

Though not an ardent or over-zealous Catholic, my father was nonetheless an adherent of the Ten Commandments and the precepts of his denomination which number six, or at least such did at that time.

One of those precepts stipulated that every adherent of the Catholic denomination was obliged to confess their sins at least once a year. 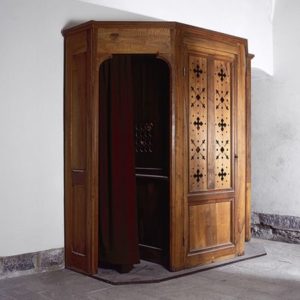 Another of the precepts ordained that all such adherents were obliged to receive the Blessed Eucharist within the Easter time, which in our diocese lay between Ash Wednesday and Trinity Sunday. This latter function was commonly known as performing one’s Easter duty.

It was during this so-called Easter time that my father and I happened to be in the city. My father insisted that I should go to confession too, and for no other reason than because he had to go, or at least had decided to. With my father being one of those who went to Confession and received Holy Communion only once a year (commonly referred to as ‘twelve months’ people), he therefore, did not savour the thought or the idea of having to make a Confession to one of his own priests, of whom there were three in our parish. Hence, he chose to do so at some church in the city where there were several, including those of the various orders – the Franciscans, Dominicans, Redemptorists, et al.

My father chose the Franciscan church. We waited outside a confessional box on which it stated that the confessor officiating therein was Father Ignatius. The priest’s name meant nothing to me, at least not at the time anyway, though I was destined to recognise him later.

My father seemed to be a long time in the confessional box. No doubt, the Franciscan priest had reproved him (and perhaps sternly so) for not going to the sacraments more regularly.

Indeed, had my father not been performing his Easter Duty, the priest might well have declined to hear his Confession, or to grant him absolution and so order him from the confessional box. Such did occur occasionally, or at least it used to.

If such had occurred to my father, then the bishop of the diocese would be the only one with the authority to hear his Confession and absolve him and I do not think that my father would have relished it one little bit with having to face a bishop!

When my time for Confession came and on the priest sliding open the little shutter, I recognised him as being a priest who had conducted a retreat or a mission in the parish next to ours some time previously, and who had been guest speaker at a Féis that had been held in our parish.
Of course, I had often seen his picture in the local newspapers.

After I had made the Sign of the Cross and began reciting the Confiteor, he promptly cut me short by asking the usual and time-worn question as to how long it had been since my last Confession, and then he asked what kind of sins I had been committing. Due to I being a trifle nervous and because of my impediment of speech, I had difficulty in pronouncing the word ‘cursing’.
“You were cursing. Is that it child?” the priest then asked.
“Yes Father,” I meekly rejoined.
“Now wasn’t that a naughty thing to be doing? Why can’t you try an’ keep your tongue clean for a change child?” he then declared.
Perhaps I was too meek and apprehensive to reply. “And what else have you been doing?” was the priest’s next question.

“O my God child, that’s another very naughty offence,” he then grunted. “Why can’t you tell the truth and shame the Devil for a change child?”

I had no rejoinder to that either but perhaps I was not supposed to make one anyway. Despite his reproof, he decreed but a lenient penance for me. Just a few simple prayers.
I felt relieved on leaving the confessional box. It was the most gruelling Confession that I had to go through hitherto. Never before had I received such a scolding from a confessor, though admittedly, I have had more sterner ones since then.

On leaving the confessional box I hoped that I would never have to undergo such a gruelling ritual again, whilst I vowed to try and evade Franciscan confessors henceforth. n