Kelly The Boy From Killanne

Famed in song and story, Paula Redmond recounts the tragic end
to the inspirational 1798 leader

The lyrics of the folk song ‘Kelly, the Boy From Killanne’, were written in 1911 by P. J. McCall. The story told in the song is based on a real person and events that happened in Co. Wexford during the 1798 Rebellion. 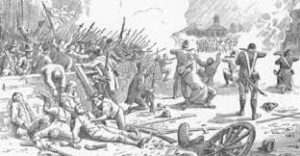 John Kelly was born in the small rural village of Killanne, Co. Wexford, in 1776. His father, also John, was a shopkeeper and farmer and his mother’s name was Mary Redmond. The family lived in the property which later formed part of Rackard’s public house in Killanne. It was bought in the early twentieth century by the famous hurling family. Kelly and his fellow United Irishmen used the loft here as a meeting place.

The lyrics of the song state that John’s height was seven feet “with some inches to spare” and this was in fact an accurate description. He was of fair complexion, with long golden curly locks, again referred to in the song “Tell me who is the giant with the gold curling hair?”.

When the insurgency of 1798 broke out, John quickly assembled able-bodied men in his district, irrespective of their religion, to fight against British forces. He started training the volunteers and sourced pikes for them.

He obtained these arms from the nearby village of Rathduff from a forge owned by a man named Johnson. When he had trained and armed his troop of men they set out for Enniscorthy – with more men joining them along the way.