Kerry’s first All-Ireland Title was not in Football!

One hundred and twenty five years ago Kerry won its first ever All-Ireland title but not in the sporting discipline the county is famous for. 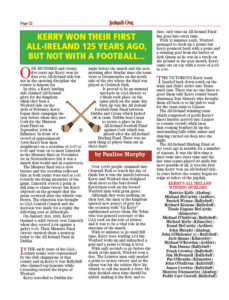 In 1892, a Kerry hurling side claimed All-Ireland glory for the kingdom when they beat a Wexford side on the 28th of February. Kerry began their campaign the year before when they met Cork for the Munster Semi Final on September 20th in Killarney. In front of a crowd of approximately 7,000 Kerry beat their neighbours on a scoreline of 2-07 to 0-03 and went on to meet Limerick in the Munster final on November 1st in Newcastlewest but it was a match that would end in controversy.

The Munster final was a slow burner and the scoreline reflected that as both teams were tied at 1-01 towards the dying moments of the game. Limerick scored a point at full time to claim victory but Kerry objected on the grounds that the point occurred after the whistle was blown. The objection was brought to GAA Central Council and the decision was made for a replay the following year at Abbeyfeale.

On January 31st, 1892, Kerry claimed a solid victory over Limerick when they scored 2-04 against a paltry 0-01. Their Munster Final victory ensured them a nonstop ticket to the All Ireland Final in Dublin.