For four terrifying hours, almost an acre of buildings in the heart of Kilkenny City became a raging inferno which threatened to engulf a major portion of High Street exactly 50 years ago to the day on Sunday, July 12th, 1970. It was only a superhuman effort by seven units of the fire brigade, which prevented Kilkenny’s biggest fire disaster.

Even as it was, the fire was the most destructive the city had had in living memory. All that remained of the furniture and electrical store of James Lowry and Son (Delahunty’s) with the exception of the front, was a mass of twisted steel, charred roof beams and tumbled masonry. 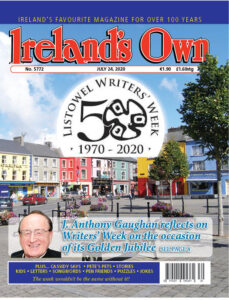 Next door the wholesale and retail grocery, wine and chemical business of Daniel Smithwick and Company was completely gutted. Stores owned by both shops were also engulfed by the ravaging flames and the destruction extended back more than 100 yards from High Street.

The offices and works of the ‘Kilkenny People’ newspaper had a miraculous escape. Flames and burning debris swept down over the roof of the building, but it was saved from the inferno.

Heroes of the disaster were the brave men of the Kilkenny fire service who risked their lives time and again and mastered the biggest and most unpredictable fire of their hazardous careers.