Terry Corrigan tells how author Rudyard Kipling developed a new-found respect for the Irish after his son, John, was stationed with the Irish Guards in France during World War I.

In the summer of 1914, the world watched on uneasily as the winds of war gathered and the crown heads of Europe amassed their armies across their frontiers.

No one could have anticipated the carnage that lay ahead and although Great Britain was no stranger to conflict, even their gnarled old generals and statesmen did not know what was to come.

Rudyard Kipling was perhaps the most famous and celebrated Englishman in the second half of the 19th century, and early part of the 20th. Author of Jungle Book, Just So Stories, The Man Who Would Be the King, and countless short stories and poems, including the inspirational If, he was feted by royalty, statesmen and all of high society throughout Europe.

He was a man of his time and stood as the poster boy for all the British Empire represented to the world. George Orwell once remarked of him that he was a “Jingo imperialist who was morally insensitive and aesthetically disgusting”.

Paradoxically, Henry James once said, “Kipling strikes me personally as the most complete man of genius as distinct from fine intelligence, that I have ever known.” In any event, Kipling won the Nobel Prize for Literature in 1907.
Kipling was born in Bombay, India in 1865 to Alice and John Lockwood Kipling. Colonial Britain by that time had grabbed some 13,000,000 square miles of territory across the world for itself, and over 400 million people were put beneath the British yoke. 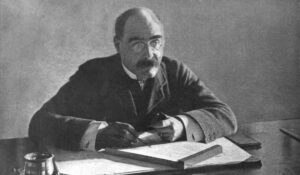 In the months leading up to the war, Kipling was busy making rallying speeches and writing to all the major newspapers in a call to arms.
He firmly believed that the German foe should be taught a lesson that they would never forget and subsequently besieged the government to declare war on Germany.

Along with his close friend, Edward Carson, he was a dyed in the wool Freemason and rabid opponent of the bourgeoning Home-Rule Bill. Kipling was the epitome of the British Ruling class who believed in the absolute invincibility of the British Empire and its war machine.
He was seemingly obsessed with all things military and when he wasn’t writing, he would be the honoured guest at naval and army manoeuvres.

When he eventually got his wish and war was declared on August 4th 1914, Kipling wasted no time in trying to get his 17-year-old son John, a commission.

Most of Kipling’s friends had already waved their sons off at the earliest opportunity as they left England assured that they would be home for Christmas replete with medals, ribbons and tales of the great adventure.
However, like Kipling himself, John had extremely poor eyesight and despite all his father’s best efforts, the boy was rejected on medical grounds at every turn.

Kipling tried to call in favours from politician’s army generals and even his good friend the Prince of Wales.
Eventually, he was accepted by the Irish Guards. This was by means of a favour called in from his close friend Lord Roberts, who was a colonel in the guards. Privately, this was a disappointment to Kipling senior who had his heart set on some of the more prominent English regiments such as the Grenadier Guards, but beggars couldn’t be choosers.
Kipling himself had tried to enlist as a young man, but he too was rejected because of his poor eyesight.