Kitty The Hare – The Changeling

Some people don’t pay any heed at all on stories about ghosts and fairies, but, for all that, why, the ghosts are there – aye, and the ‘good people’ too – and tis many a time I met them myself, in my rambles and I had a narrow escape one time, that I wasn’t carried away into a Lis.

So let ye listen to me now for tis a true story ye’re going to hear tonight, every word of it.

Away in the Co. Kilkenny it happened, many long years ago now; and the first part of the story was told to me by Peg Reilly, who was witness to it, and the other part of it I saw with my own two eyes for myself. 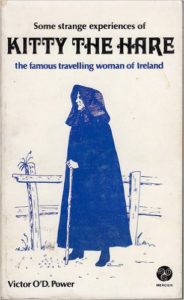 Peg Reilly, at the time the queer event took place, why, was nursing a little baby belonging to one Mrs. Doherty, at a place called Ballycroney, in the parish of Glenmore; and Bid Doherty was laid up at this time, the poor craythur, with the pleurisy, so Peg was looking after the little child – a grand little girl of just thirteen months, she was, with big blue eyes and yella hair and a skin like milk, with a pink blush in each of her cheeks, for all the world as if she was painted.

Little Minnie was Bid’s first child, and the poor mother, God help her, was cracked alive about the infant.

Bid was after marrying a man old enough to be her grandfather; though, at the same time, mind you, she was mad in love with a cousin of her own – one Murtagh Walshe of Ballyreddy; but Murtagh’s people wouldn’t hear of him marrying Bid, as her fortune wasn’t big enough, and they were striving to force him to take another girl who had four hundred pounds to get.
And, faith, the end of it was that Murtagh cleared out of the country and went away to England to work; and early in the next year, Bid’s people coaxed her to marry old Micky Doherty; and, when Murtagh heard this he got reckless like, and he picked up with an Irish girl in Swansea and he married her, and, for a year and a half after that, he never wrote a line to his own people at home.

Then, one fine day, didn’t he come back to the old home, just to say goodbye to them all, as he was about to start for America – himself and his wife and their infant son. He didn’t bring the wife or the child with him, as he knew well enough that there wouldn’t be much welcome before them, why; and the day before he left his old home for America, didn’t he stroll over to Ballycroney to see his old sweetheart – Micky Doherty’s wife – once again and to bid her farewell, God help us.

Of all other places, wasn’t it just alongside of the Ballycroney rath they chanced to meet on that August evening and Bid was nursing the infant daughter and she was sitting down on the green, grassy bank under the hawthorn bushes at the edge of the rath, and she was singing a little song to the baby as Murtagh, all of a sudden, came over straight to her through the field.

And, if he did, when his eyes fell on Bid and the infant in her arms, he couldn’t keep back the tears, for the poor chap always loved her, and faith, sure poor Bid was just as bad about himself, every bit, and when she saw him crying, she took to cry too, and their hands clasped together, and not a word could they speak for fully five minutes.

And, in the end, they got a bit easier in their minds, and, when Murtagh took notice of the infant and when he saw ‘twas the living image of Bid herself, a thought darted through his mind, like a flash of lightning, and, if it did, he made no delay to follow it up.

And, “Bid girl,” says he, “since yourself and myself were disappointed about one another, the best thing we could do not is to plan out a match between your little girl here and my little son, when the two of them are of an age to get married.
“Your little girl, God bless the craythur,” says he, “is the stamp of your own self and my little son, Dannie, is the image of his father, so they tell me anyway. And ‘twould be an ease to my mind, Bid,” says the poor chap, “to know that, that even though you and myself were parted, yet our two children would be happy together, in the years to come as husband and wife.”