Kitty The Hare – The Fate of Cleena

Due to popular demand, we are republishing a Kitty The Hare story as previously seen in Ireland’s Own in the 1970s. We will have another ‘Kitty’ story for you in the Hallowe’en Special.

I’m going to tell you all a very queer story tonight, so I am, and I don’t know how it didn’t come into my head long before this to tell it to you. But as I was saying last night, I meet with so many strange things, here and there, in my rambles, mossa, that they get all mixed up, tray-na-hyalia, in my brain. And, ‘twas this very day, and I strolling along the road by Corran Lake below, that the story of poor Cleena Magrath came back to me out of the past. 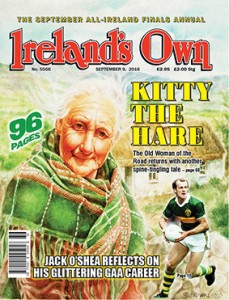 I think ‘twas the lake, and the rushes, and the hills all around, and the curlews, and they crying from Labbig Cathal that brought back the story to my mind, imbeersa, because the place it happened in was as like Corran Lake and Ballyroe as any other spot I know in all of Munster so it was, the very same kind of a lake, why, and the hills all about it, and it all fringed around with water lillies in the summer time and they resting like little saucers on their big green leaves and the blue water below them like a looking glass.

And the first time I ever laid eyes on little Cleena Magrath she was standing out in the water of Moona Lake, away in Kerry, and she picking a bunch of water lillies for a strange gentleman who was standing by the water’s edge, and he having a grand little child by the hand, and the car after driving him to Moona Lake waiting on the high road above, why!

And, faith, I asked the driver who the strange gentleman was, and I passing by along the road, mossa, and he told me he was an Englishman who was staying with his wife and child in the hotel in the village, a couple of miles away.

“And he spends every day driving around the country to see the sights, ma’am,” says the driver, “he is one Mr. Stanley Morrow. I believe he is the manager of a playhouse stage group in England,” says he. “And the instant minute he spotted that little girl out there in the water he went down to talk to her and he offered her a two-shilling piece only to go out in the lake and pick him a bunch of lillies.”

“And who is the little girl?” says I to the driver of the car.

“Her name is Cleena Magrath,” says he, “she’s the eldest daughter of James Magrath, a small farmer living in that house in the trees just above the lake. She was christened Cleena by a neighbouring woman here who is a great warrant to write poetry in Irish, and the like of that.

“Cleena was the Queen of the Munster fairies,” says he, “and I don’t know any other child around these parts with that name on her, only Cleena Magrath herself.”

And, faith, I sat down in a corner of the hillside at the south side of the lake until the English gentleman was after driving away on his jaunting car, and he having a big bunch of water lillies in his fist; and then I called Cleena to me, and we began to chat together, so we did, and I thought I never in my life laid eyes on a lovelier little girl than she was.
Some way or other she was too nice for this world at all, at all, with her smooth skin, and it so pink to look at, and her big blue dreamy eyes, and the long black lashes and they resting on her cheeks. And her hair was falling in shining ringlets down to her waist, and the breeze from Moona Lake was blowing it all around her face and neck like a golden shower.

And I could never tell how it was that day long ago, but, and I looking into little Cleena’s face, something was whispering to me all the time, mossa, that the child wouldn’t have luck nor happiness in the future, and, mavrone, but I wasn’t far out in that. Whatever made me think such a thing of the poor little girl, I couldn’t tell you, if I was on oath this minute, so I couldn’t. But it was as plain to my mind that minute, all the same, as if it was printed in letters of fire before my two eyes across little Cleena’s forehead, God between us and all harm this night!

And, while I was talking to Cleena, two children – a little boy and a little girl – about two and three years old, or so, came along the road to us and Cleena told me they were her brother, Johnny, and her sister, Violet, and ‘twasn’t long till a fine handsome woman came down the field behind us, and she driving seven cows before her; and, begannies, she was the mother of the children, Mrs Magrath herself.

So we fell into chat together, and Peg Magrath and myself became great friends entirely.
“And so you’re after taking a fancy to Cleena, ma’am, are you?” says Peg Magrath, and she sitting down alongside of me above the lake.

“She’s one of the queerest children ever I saw, in some ways,” says she, “she don’t seem to care a pin to be with other little girls or boys of her own age, playing with them and so on,” says Peg Magrath.

“But she’s always rambling about the hills and down by the lake all by herself and she talking to herself often too, just the same as if someone was with her,” says Peg.
“And, faith, would you believe it, ma’am,” says she, “I’m often troubled in my mind about Cleena. Sometimes I say to myself she is not of this world at all, God help us.”
“She’ll grow out of this, never fear, ma’am,” says I, “and she’ll be just the same as the other little girls around her.” And I stayed for a couple of days at Mrs. Magrath’s house after that and little Cleena and myself got to be great friends entirely, and still I couldn’t get over that fear, or whatever it was, that often sent a shiver through me and I looking into Cleena’s face.

“Hurry up and grow into a big girl, Violet, alaylum,” says I to Cleena’s little sister, the very day I was going away from the farmhouse by Moona Lake. “Cleena wants someone to go rambling with her, and you’re not big enough yet. And I’ll soon come back here again with God’s help,” says I to the two sisters, and they clinging on to me, not to let me got at all, the craythers. And the two of them took to roar and bawl, and they having a hold of me by the skirt, the poor children, and it was as much as their mother could do, to coax them back to the house at all, at all. And away with me, and I kissed my hands to them from the top of the hill: and, would you believe it, fifteen long years went by before I ever again set my two eyes on Moona Lake.