Kitty The Hare – The Undertaker

Based on the stories of Victor O’D. Power

‘Tis good to be seeing you and ‘tis rattled you look on this Hallowe’en night, and sure ‘tis no wonder you are with the wind whistling and howling through the bare arms of the trees and every shape you look at seeming like a scalded creature that’s going to take you up and devour you in its jaws, begannies.

Well, faith, sit in closer and I’ll tell you a story that happened on Hallowe’en, and the night before, on a road in south Tipperary, just a mile outside of the town of Carrick-On-Suir. 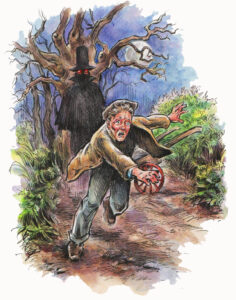 A trader known as Two-Bob Tommy was pulling a cart along the roads after being to a market in Portlaw, where he had been peddling his wares for the day. He’d had a good bit of business, the crayther, and decided to stop off for a few ales at an inn on the side of the road on his way home to Carrick.

It being the end of October, the darkness had come early, and sure by the time he was nearly home and he singing songs at the top of his merry voice to pass the time, the only light left was what the moon shone down on the road before him, mossa.

And just and he passing the burnt out frame of a famous old oak tree that stood dead from a bolt of lightning it was after getting many years before, didn’t he stumble and the wooden wheel of his cart buckled in a pothole. And he stood there cursing his bad luck for a minute, wondering how he was going to fix it, when he’d left his tools back home in Carrick.

And all the while he was mulling over what to do, he didn’t notice a sinister looking figure in a dark suit and tall hat that was after appearing underneath the oak tree, and it standing as still as a statue looking out at him.

And, begannies, when Two-Bob Tommy eventually felt an unnerving presence nearby, he raised his head and the mouth fell open on him when he saw what was looking back at him, imbeersa!