THE tale of an undersized Irish-born bushranger who rode around on an ostrich robbing travellers at gunpoint is helping to put an Australian town crippled by drought back on the map.

The South Australian community of Meningie, on the banks of Lake Albert, about 150km southeast of Adelaide, was hit hard by the Millennium Drought, which gripped much of Australia from 2006 to 2010. The water level in the lake dropped significantly, leading to a spike in salinity, which devastated the local fishing, dairy and tourism industries. Rather than sit back and watch their town die, the Meningie Progress Association has revived the legend of John Francis Peggotty as part of a long-term project to generate interest in the area and lift community spirits. 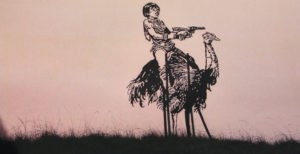 Born prematurely in County Limerick, Ireland, in 1864, Peggotty only grew to the height of a seven-year-old child. He spent some time in South Africa, where ostriches were commonly ridden, before moving to Australia.

After settling in Adelaide, he is said to have recruited a gang of boys and together they slid down chimneys and stole jewellery, which Peggotty wore proudly all over his body. The gang disbanded and Peggotty was next seen draped in jewellery and brandishing pistols while perched on the back of an ostrich in the Meningie area.

He was credited with more than a dozen hold-ups, and the murder of two travellers before attempting to rob Henry Carmichael as he pulled to shore from a day of fishing on the Coorong, an estuary flanked by sand dunes, on September 17th, 1899.

Peggotty fired twice at the fisherman but then fled on his ostrich when Carmichael produced a rifle. Carmichael set off after Peggotty on a horse he had tethered by the shore but was no match for the ostrich, which excelled in the soft sand. So he instead took aim from a distance and fired several shots, hitting the ostrich and Peggotty as he reached the top of a distant sand dune. When Carmichael finally reached the top of the dune he found the dead ostrich, a broken gold chain worn by Peggotty and a trail of blood leading into the scrub.

The eccentric bushranger was never seen again but his stash of gold chains and jewels are said to be buried deep in the Coorong.

The Birdman of the Coorong statue of Peggotty’s saddled ostrich was unveiled on the Meningie foreshore in May 2013. It has since lured hundreds of passersby to pose for photos while perched in the saddle.